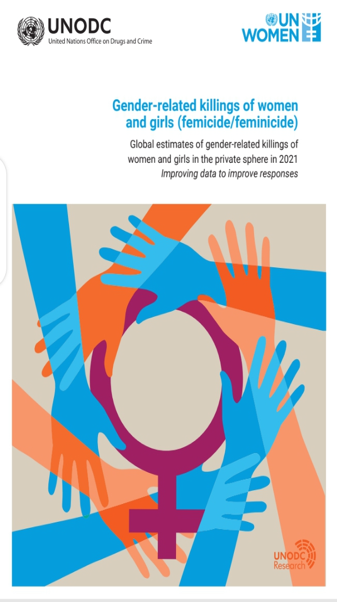 The fight to end violence against women and girls is becoming more difficult as the heinous act itself is heavily influenced and directed by those closest to the women and girls who are victims of various forms of violence.

A clear example of this scenario specifically between this and last year can be referenced in the act by a 45-year-old man in October of this year, who murdered his wife for bush meat in Bong county, and the devilish behavior exhibited by Abraham Wento, who murdered 13-year-old Grace Tamba in Margibi county in May of this year.

These, along with several other mysterious factors surrounding women’s insecurity, project onto the recent UN Women global estimate of gender-related killings of women and girls in private spheres in 2021.

It shows the vulnerability of African women and how they are being suppressed by different forms of violence, especially by their intimate partners and families.

In 2021, 45,000 women and girls were killed worldwide by their intimate partners and other family members, giving an average of over five women and girls killed every hour by someone in their own family.

In key findings of the report, it indicates that globally, an estimated 81,100 women and girls were intentionally killed in 2021, as the overall number of female homicides has largely remained unchanged over the past decade.

In addition, it further reveals most killings of women and girls are gender motivated, as in 2021, around 45,000 women and girls worldwide were killed by their intimate partners or other family members, meaning that, on average, more than five women or girls are killed every hour by someone in their own family.

Here in Liberia, women account for more than 50% of the labor in agriculture, cash crop production, and food crop production, along with marketing and trading. Despite their heavy role in the workforce, women are the most vulnerable to all forms of violence.

As no exception to this report, Liberia has recorded dozens of gender-related killings in the last eleven months that were mostly committed in Bong, Margibi, Nimba, Montserrado, and other parts of the country.

Several other instances of gender-related killings in Liberia can be found, including the mysterious story of Kokulo Kpaquea in Bong County, who chopped his wife several times to death because she refused to give him five hundred Liberian dollars. and a man believed to be in his 40s who also killed his wife in Sanniquellie over her alleged refusal to have sexual intercourse with him in recent days.

However, between 2010 and 2021, Europe witnessed an average reduction in the number of female intimate partner/family-related homicides (by 19%), with differences across sub-regions and signs of trend reversals since 2020 in some sub-regions such as Western and Southern Europe, but this has yet to be demonstrated in Africa.

Despite the huge number of gender-related deaths highlighted in the 2021 report, many gender-related killings of women and girls are not identified and counted, especially in countries in Africa, Asia, and Oceania.

In some cases, the UN Women attributed the data gaps to a lack of reporting mechanisms between sub-national, national, and international data producers. In other cases, they believe homicides are simply not recorded by or reported to the police or other competent authorities.

With recommendations on prevention of gender-based violence, the UN Women maintained that strengthening the justice sector’s response, particularly that of law enforcement, is crucial and one of the most challenging issues when responding to gender-based violence against women and girls due to limited awareness, discriminatory attitudes, and harmful gender bias inherent in law enforcement and justice sector institutions.

“A positive first contact experience and high-quality, survivor-centered police and justice responses are fundamental to preventing and eliminating gender-based violence against women and girls and ensuring it does not escalate to femicide or gender-related killings.” “A positive first contact experience by victims when reporting gender-based violence may not only increase trust and potentially save lives but also encourage more reporting and disclosure over the long term.”

Other measures implemented by countries in the criminal justice system also encompass the establishment of specialized units within the police, prosecution, and judicial services to investigate domestic violence cases or hate crimes. Evaluations of specialized courts on gender-based violence against women and girls have found that these are more likely to ensure survivor-centered and gender-sensitive responses throughout criminal proceedings than non-specialized courts.

They further added that gender-related killings of women and girls may be prevented through early intervention risk assessment and ensuring that women and girls have access to survivor-centered support and protection, as well as by improving gender-responsive policing and justice services.

However, the UN Women believe that the 2021 figures also underscore the urgency to prevent and respond to femicide with stronger actions, as they show that home is not a safe place for many women and girls.

Even though the numbers are alarmingly high, they have said the true scale of femicide may be much higher, as too many victims of femicide still go uncounted. Given inconsistencies in definitions and criteria amongst countries, for roughly four in ten women and girls killed intentionally in 2021, there is not enough information to identify them as femicide, especially for those killings happening in the public sphere.

The UN Women believes that women’s rights organizations play an important role in preventing gender-based violence against women and girls by advocating for and securing normative and policy change, providing psycho-social support services, and holding governments accountable. Partnerships between women’s rights organizations and relevant stakeholders, such as national authorities and UN a

Gender-related killings can take place in different situations within both the private and public spheres and within different contexts of victim-perpetrator relationships. It includes homicides as a result of intimate partner violence, as well as rape-murder, so-called “honour killings,” dowry-related killings, killings of women accused of witchcraft, and gender-motivated homicides connected with armed conflict or with gangs, trafficking in persons, and other forms of organized crime.

The UN Women global estimate of gender-related killings of women and girls in 2021 was prepared by the Research and Trend Analysis Branch, United Nations Office on Drugs and Crime (UNODC), and the Ending Violence Against Women Section, United Nations Entity for Gender Equality and the Empowerment of Women (UN Women).