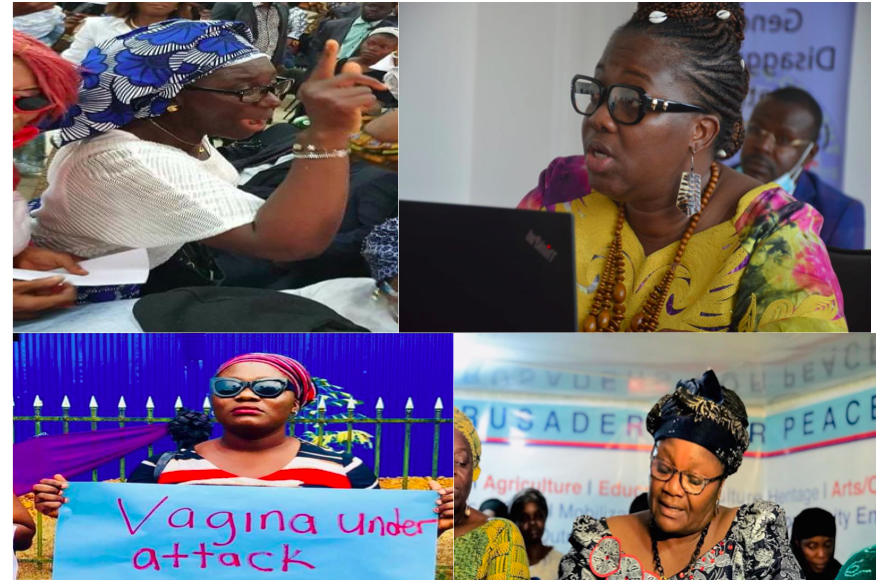 A controversial book co-authored by Isaac Tukpah and Emmanuel Clerk, titled “George Weah: The Legend, The Rise to Power,” has sparked mixed public reaction in Liberia. The book, which was meant to promote President Weah by truthfully narrating his biography, has tragically landed in the hands of the reading public.

In reactions, while the Ministry of Gender, Children and Social Protection (MGCSP) and others, including Liberia’s Culture Ambassador Juli Endee along with the Traditional Women of Liberia, strongly condemned the publication, several other women have stated opposing opinions.

The Minister of Gender in a press conference said she views the book as an onslaught that seriously threatens the huge stride made over the years to ensure that the message of Gender sensitivity resonates with all sector, tribe and classes regardless of political or religious affiliations, or difference. She said any approach, attitude, characterization and description that appears to discriminate womanhood should be condemned to the fullest.

“As Traditional women of Liberia, we are in solidarity with Madam Clar Marie Decontee Weah and her family for this unwarranted and distasteful characterization. The Traditional Women cautioned that no degree of politics should allow this manner of abuse towards Liberian women. We should at all-time present positive traditional values of our country Liberia,” the statement reads

The statement, which read by Queen Juli Endee, Traditional Queen, said the assertions made in the purported book by Isaac Vah Tukpah and Emmanuel Clarke is hateful and disgusting, and said such an act being displayed, is bad for Liberia’s high-earned image since its foundation. They said since the mothers and traditional women stakeholders, we want to therefore shame this act by Ivah Tukpah and Emmanuel Clarke, which are a classic disrespect to Liberian women and a continued assault on womanhood. At the same time, we would like to reiterate our condemnation of rape and all forms of violence and abuse against women and girls in Liberia.

However, Madam Miatta Garmai Darwolor the CEO of Sister Aid, has chastised the Minister of Gender for overreacting to a single publication about the First Lady, while many other grave situations remained unaddressed, she claims. Though no woman’s private life should be published without her agreement, she claimed that an extract from a book she read, authored by Vah Isaac Tukpah, depicting criticism on a private sexual move by Madam Clar Weah, Liberia’s First Lady, was not the worst case situation.

“Women and girls in Liberia are experiencing threats of sexual violence on a daily basis. In recent days, there has been huge outrage and outcry by women’s human rights defenders over the high rate of rape and other forms of sexual violence in Liberia, but less has been done to address this menace. We hope to mobilize the same energy towards the most marginalized and vulnerable groups of women and girls, as has been exerted by top political and influential actors in Liberia in the case of the First Lady. From the alleged rape case of 13-year-old Blessing Moulton, to Lady JE, who was raped and died on the 25th of January 2022, a 13-year-old child tied and raped on January 28, 2022, little Mitchell sodomized to death in Pitty Town on March 28, 2021, and several others. Now it’s the time we address this menace. Whether you’re part of an elite political class or not, rape or violence against women and children has no limit to its effects. Perpetrator who sees it as pleasurable and their way of life influences it”, she said on social media.

She believes it is unfortunate that our country only stands up and makes headlines when abuse directly affects the ruling elite and people in positions of political power.

“Women and youth groups have marched and protested against this uncommon social abuse but not much have been done. Now that the consequence seems ravaging and demoralizes the value system of the First Lady, we see top-notch political and influential people adding their voices in condemnation”, she added.

The Sister Aid CEO said the First Lady has the money, power, and clout to file a law suit against her offenders whenever she wants, but the 13-year-old rape survival doesn’t have a voice, no means of transportation to follow up on her case in court, and no one can be there for her when all hope is lost, adding that when all hope is lost, she dies, and the medical report says she died of a known disease. This is why she claims that her support for women’s rights is purposely biased. She stated that she is a supporter of women and girls who are the most vulnerable, at-risk, and disenfranchised.

“I hope we can mobilize same energy as a people to fight all forms of violence against women and girls in Liberia”, she concludes.

Furthermore, Liberian women should hold President Weah accountable for disparaging his wife to another person, according to Madam Victoria Koiquah, the National Alternative Congress’s (ANC) Vice Chairperson for Political Affairs. She claimed that the book’s authors were citing the President and that the book was written to promote him because Ivah was a supporter at the time, and that the book has since been written but not published.

Pundits believe that even though the President did not sanction the book’s public distribution, he may have seen and read it. According to individuals close to the President, his family is considering filing a lawsuit, but lawyers argue that the rule prohibiting anyone from suing the President also prohibits the President from suing anyone.