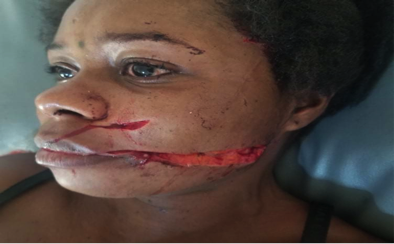 Despite government’s reported reduction, violence against women and children appears unending in Liberia. According to police sources, two people, a man and a woman, have been charged with attempted murder and aggravated assault and will appear in court tomorrow for jointly seriously assaulting a woman believed to be the guy’s biological daughter.

Yamah Zaza, 28, was stitched up for wounds she sustained after a woman named Maih Zaza (believed to be her aunty) and a man named Kenneth Zaza approached her in a fight on Sunday, January 30, 2022, at the Christian Community, Red Light, in the Paynesville neighborhood.

Yamah, who could not speak because of the deep cuts on her jaw, authorized her cousin, Gbolee Zaza, to speak to Womenvoices on her behalf.

“She said she came home to get a pair of rain boots and a rain coat for her little brother, who requested for these things to use, but she realized that Pa Zaza (her father) had locked the door to stop her from entering the house, as he walked away to call his sister”. Gbolee said he personally intervened quiet them down, which he said he succeeded doing and walked, but to his utmost surprise he saw Yamah bleeding profusely.

“Seeing them go, I walked behind them to see what had happened. We got there and I asked Pa Zaza to open the door and allow her in. After he opened the door, I thought it was settled. But immediately, when I turned my back, I heard her shouting and running. Our aunt had used an orange knife to gash her on her jaw and her back while he was saying, “You lucky I did not kill you, but the next time, I will kill you and nothing will come out of it because I get money to spend,” he explained.

Yamah is a divorced mother of three who recently returned from Sierra Leone, where she was happily married before divorcing. She explained that she left her rented apartment and moved in with her father at his request.

According to the narrative, her father asked her to leave the house when she secured a job at a Sinkor supermarket that only required her to come back on weekends. Yamah explained that due to limited transportation, she finds it difficult to return home on a regular basis, so she asked a friend in Sinkor to house her during the week and return on weekends. Some feel it was something that motivated her father to make the request for the room.

Yamah, who has not reported to work for the past two days after the incident, has been informed that she would be replaced in her current position. Though Gender Ministry authorities are claimed to have visited the victim, it is unclear whether they will intercede to save Yaham’s employment.

Mr. Kenneth Zaza, according to those close to him, is a drunk and violent man who has already been accused by the police for a similar act in which he allegedly beat and cut his former wife in the head with a shovel, resulting in their divorce a few years ago.

Weah mandates supporters to recapture Montserrado at all cost