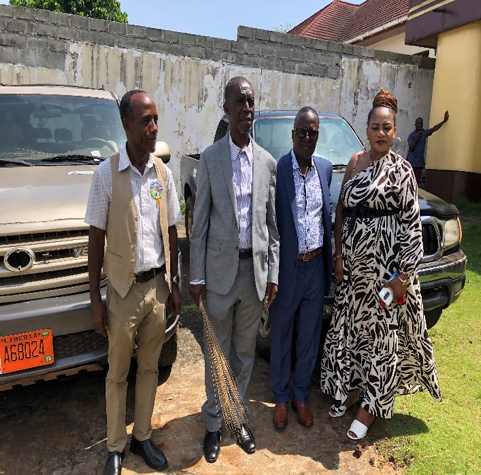 On Tuesday, November 8, 2022, Liberian supporters in the United States of America, specifically Minnesota, donated two vehicles and a printer to Team Tiawan Gongloe.

The machines provided by U.S.-based Liberians are a way to encourage Cllr. Gongloe to run for president in the 2023 elections and transform Liberia.

Recall that Cllr. Gongloe announced his intention to run for president in the upcoming 2023 presidential and general elections in order to rid Liberia of corruption.

Cllr. Taiwan Gongloe stated in a brief statement at the handover ceremony that during his recent tour of the United States, his supporters in Minnesota promised to donate two vehicles in response to an invitation.

According to Cllr. Gongloe, the representative of American supporters is currently in Liberia to deliver the vehicles to Team Gongloe.

He indicated that Team Gongloe is an organization comprised of Liberians who do not necessarily belong to any political party, emphasizing that while some Team Gongloe members do belong to political parties, the only thing they have in common is their support for his 2023 presidential campaign.

Cllr. Gongloe disclosed that his recent visit to Bong and Nimba counties was a success, highlighting his efforts to elevate Liberian politics.

He emphasized that normally politicians only visit county capitals, but on his trip to Bong County he visited 37 towns and villages off the main road.

“I was told that I am the first presidential candidate in the history of every town and village I visited,” he said.

Cllr. Gongloe stated that Liberia is not the cities but the rural areas where Liberians reside, adding, “I visited over 37 towns in Bong County to assess the scope of the work I intend to undertake.” I have returned home (Nimba County), where I visited 106 cities. I am elevating politics, and it is essential that individuals persuade the electorate to visit them, observe their condition, and speak with them. We are attempting to end the practice of giving rice, scholarships around election time, and money to political candidates.

Further, Cllr. Gongloe stated that they want to eliminate election-time humanitarians and political investors because the results are corruption and the people do not receive the benefits. As a result, we want to change this so that elections in this country are based on the message you have for the people and how you can improve their lives, just as they are in the United States.

Tony Leewaye, who represented the board of members in Minnesota, made the donation and stated, “Every Liberian has the responsibility to transform Liberia and change the negative narratives in order to have a better Liberia. These machines are their way of contributing to Team Gongloe’s fight for Liberia.”

Team Gongloe, according to Mr. Leewaye, has the ability and capacity to transform Liberia into a better nation because he is a man who stands for openness and transformation.

Weah Karpeh, the executive director of Team Gongloe, expressed gratitude to their American supporters after receiving the donation.

Weah stated that the delivered machines will be used for the intended purpose of extending, expanding, and going beyond locations with Cllr. Gongloe’s messages to the Liberian populace.

He added that the vehicles will also aid in educating Liberians about building a nation based on the rule of law, combating corruption, and expanding the economy.