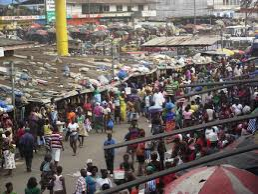 As it intends not use force

Leila B. Gbati wrote this.

It can be recalled that the government of Liberia for some parts of last year relocated marketers from RedLight to Omega Market, which claimed the attention of the entire country. Citizens were grateful to the government for such an effort because, according to them, the red light market was disordered and populated. But unfortunately, it did not last long. Marketers used the festive season to return to the RedLight market, where the government is bent on making sure that they return to and stay at Omega Market in Paynesville.

It is against this backdrop that the government is pleading with marketers at the RedLight to leave and return to Omega Market in Paynesville.

According to the government, they do not want to use force on the citizens but want to engage them and make sure that marketers at RedLight will have the opportunity to listen to President Weah and the government before leaving the RedLight market.

The Minister of State, Mr. Nathaniel McGill, made the plea on Wednesday, January 26, 2022, at a major press conference held at the Ministry of Foreign Affairs on the Capitol Bye-pass.

Speaking to journalists, Minister McGill indicated that during the President’s State of the Nation Address recently, he told the nation that the country would be celebrating 200 years. It will be celebrated for one year, but the official celebration is scheduled for February 14, 2022, at the Samuel Kayon Doe Sport Complex in Paynesville City.

Minister McGill said that as part of the bicentennial celebration, President Weah has been on a tour to make sure that the country has a facelift for international guests.

President Weah has invited some of his presidential friends, including officials from the United States government, to come and celebrate the Bicentennial with Liberians. Therefore, every Liberian, whether an owner of private land or not, should clean their property so that the city can represent the country when guests arrive.

He also said that apart from the bicentennial celebration, there is a burning issue that has drawn the attention of the President and that has to do with the Gobochop and RedLight Market.

The Minister of State emphasized that the President does not want to use force to move citizens from RedLight but wants to engage with them in making sure that marketers at RedLight will leave.

“Marketers will have the opportunity to listen to the President during the engagement meeting, and after that, they will be able to leave,” he said.

Additionally, Minister McGill told reporters that marketers at RedLight are in the construction process that is currently ongoing and said construction is to be completed by April. Failure on the part of the GOL to finish the road construction means the government will lose millions of dollars.

He noted that the President is calling on citizens at RedLight to please leave, adding that “the government does not want to use force.” We are giving them an opportunity to work with us jointly so that in the next couple of weeks, our citizens who are currently selling at RedLight will leave and go to Omega Market. The government has spent a lot of money to improve the Omega Market, so why is it that our citizens do not want to go there?

Meanwhile, he encourages marketers to attend the meeting, which is intended to give the people an opportunity to work together with the government so that they can return to Omega Market.

“The issue of RedLight is important to the heart of the President, who loves his people and does not want to use force on his citizens but wants to engage with them to return to Omega Market. People should be leaving the RedLight market by now, and if they refuse to leave, there will be a second option, and that first option is to dialogue with them. Right after Friday’s meeting, a deadline will be set for them to return to the Omega Market and show that no one wants to embarrass, and it is not in the government’s interest to embarrass anyone. That is why the President is doing everything in his power to improve the Omega Market for everyone, “he said.

Also speaking, the City Mayor of Monrovia, Mr. Jefferson Koijee, said that the government tried to create space for citizens to be able to sell, and thankfully, through the instrumentality of the President, they now have areas for people to sell, but unfortunately for them, people have returned to the RedLight Market.

Mayor Koijee emphasized that effective after Friday, January 28, 2022, they will be engaging marketers as much as they love them, but they are very frank with their decision.

“This government was not produced by itself but by the people, and the people got the responsibility to own and obey the government and what it wants them to do, which is particularly in their interest,” Mayor Koijee said.

He further stated that the government has the responsibility to ensure that the people are safe and well taken care of, emphasizing that the situation at RedLight is chaotic and disorderly. Therefore, they are not going to tolerate that because leadership, not lawlessness, governs the country so anyone who is attempting to ensure that RedLight will be lawless will not hesitate to ensure that the law is employed effectively.

This is why the government is devising a strategy to find a way for you to leave RedLight, and we will begin the process immediately after the meeting on Friday, he said.