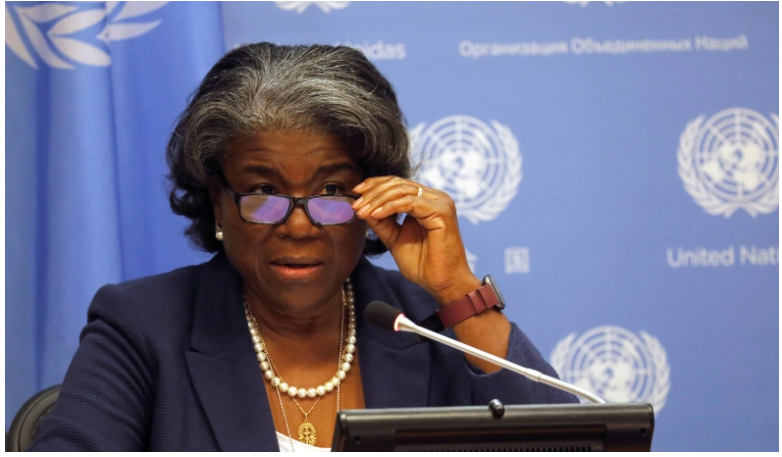 She gave her statements as a panelist at the Wilson Center’s virtual event “Commemorating 200 Years of US-Liberia Ties: Moving Forward Together” on Thursday, March 31, 2022. Other panelists include some former and present U.S. Ambassadors to Liberia: Ambassadors John W. Blaney, Donald E. Booth, Christine A. Elder, and Deborah R. Malac and Michael McCarthy.

Making opening remarks, Ambassador Greenfield said: “Again, I feel so honored to be among this esteemed group. And then, Ambassador McCarthy, you know, I planned to be in Liberia in February, and I can tell you I was so excited about getting back there. I was so disappointed that I couldn’t make it, but it’s still on my agenda. I will look for an excuse to get back to Liberia at some point and look forward to meeting you there. Let me also thank Yale World Fellow and former Deputy Foreign Minister, Elias Shoniyin, for moderating this esteemed group”.

The former U.S. Ambassador to Liberia said though she is a true friend of Liberia, it was necessary to emphasize that Liberia’s major problem is corruption.

Especially now, and for Liberians listening, I say this as a true friend of Liberia. And Liberians know me for being that friend. Liberia has a serious problem right now, and that’s taking on a number of issues. Foremost among them is the issue of corruption. And this is an issue that we are seeing across the board, not just in Liberia, but in other places. “

She said corruption is an act of robbery and a cancer in society. “It is the government stealing from the people of Liberia, from the mouths of children. It takes away access to health care. It denies citizens their right to public safety. It stops young people in Liberia from getting the education they deserve. It takes the future away from them. It prevents the country from having the healthy business environment that it needs to lift Liberians out of poverty. It has denied Liberia its place in history as a successful and prosperous country with so many resources to contribute to its people’s well-being.

According to Amb. Greenfield, corruption is a democracy killer; as such, it cannot have a place in Liberia, a country that, according to her, they are counting on as a bulwark for Africa’s democracy.

To me, this is the most pressing, because it’s the most forward-looking challenge facing Liberia today. And it is, frankly, one that we need to work on, and it is, frankly, up to the leadership of Liberia to fix it. “Only Liberia’s leaders, with the backing of and pressure from the people of Liberia, can create the environment of transparency and accountability the country needs,” she noted.

The U.S. envoy said both Liberian leaders and ordinary citizens in the markets know her. “The people on the streets, the everyday Liberians who are determined to improve their lives and their future, all know that I am speaking the truth right now. So, together, we must take on corruption. We have to defend democracy and push for a better future for the Liberian people. We cannot continue down the path that Liberia is on right now. It is time for Liberia to live up to its principles, to live up to its foundation, and to be the leader on the continent of Africa that we know Liberia can be. It’s a small country, but it’s mighty because of its resources.”

Answering a direct question about how she sees US-Liberia relations in the future, Ambassador Greenfield said she would not preview what America is thinking or how it will deal with the issue of corruption as it relates to Liberia. “I know Ambassador McCarthy has corruption at the top of his agenda in every meeting that he has with government officials. It is something that, as I noted, the leadership has to address. If Liberia is going to have a future, Liberians have to have confidence in their government and have confidence that their government is doing right by the people, and at this moment, there are some questions about that. “

She said her government has concerns about corruption in Liberia. And I know that Ambassador McCarthy has been raising these concerns directly with government officials, as have all of the previous ambassadors, regardless of when they were in Liberia. This is not a new problem for Liberia. But it is a problem that I think is more prominent now because of the impact that it is having on the country, given that we’ve just gone through the pandemic and we’re dealing with all of the consequences of that, even the Ebola crisis, that set the country back so far”.

It’s important to remember the context that brought them here. They were leaving behind a country where slavery was legalized. But they were also pushed out, and I remind people all the time about that history. They were pushed out and pushed abroad, in part by the American Colonization Society, a racist organization with the express project of removing free black people from America. But, more importantly, they came in search of freedom.”

She said it was a hard journey that shouldn’t be romanticized. People died on this trip. Others perished soon after arriving. And yet the ACS kept sending more free black people away. When they arrived, they encountered the indigenous people of the land, which sometimes led to more conflicts, with some new arrivals even inflicting some of the racist attitudes they had learned in the United States onto the indigenous population that they met. The Ambassador said racism wasn’t the only reason they left America, nor the only driver of their new life.

According to Ambassador Greenfield, those first people also made the arduous journey across the Atlantic for a reason memorialized on Liberia’s coat of arms: “the love of liberty brought us here.” I can’t imagine what it felt like for those free people arriving to establish Monrovia. But I suspect that I had a taste of that feeling when I first went to Liberia, some 44 years ago”.

I was a student, and I came to study in Liberia, and it was my first time ever leaving the United States. And I remember looking out the plane window of my Pan Am flight – for those of you old enough to remember Pan Am – and seeing the astonishingly beautiful coast, the rolling waves, and the white sands. You will still see that when you arrive in Liberia. I felt an immediate connection to Liberia and that continues for me today. “

I felt I was returning to the continent of my ancestors. And I was landing in a country with deep, strong, historical ties to my own country – the very ties we’re here today to reflect upon and to commemorate. When I reached the ground, the first thing I remember was the heat, but the heat was also surrounded by the warmth and kindness that I was greeted with from the Liberian people, traits I have found to be characteristic of the Liberian people, even today. I really felt like it was a homecoming for me.

Meanwhile, Ambassador Greenfield has commended Liberia for cordial working relationship at the level of the UN. “In my role as U.S. Ambassador to the United Nations, I am particularly thankful for the ways that Liberia works with us in the multilateral space. We are grateful for how often we see Liberia vocally advancing peace, prosperity, human rights, and democratic norms, and serving as an upstanding member of the UN fora”.