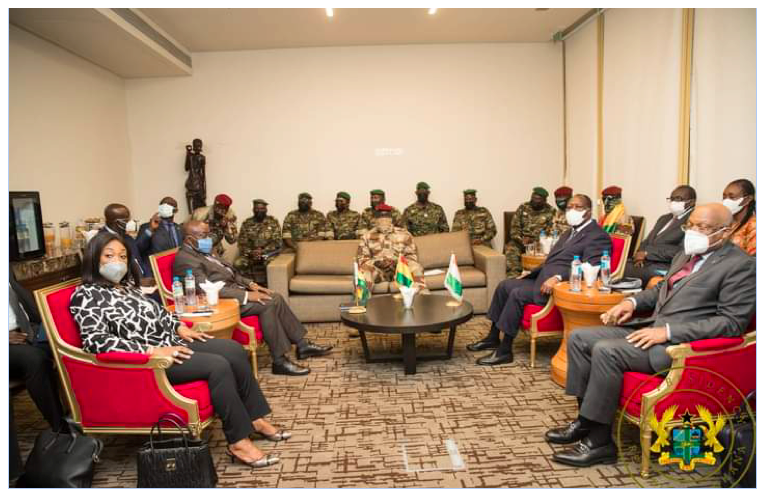 Thursday to freeze the financial assets of the junta and their relatives and bar them from travelling in response to the Sept. 5 ouster of President Alpha Conde. Coup leader Mamady Doumbouya has shrugged off the move, telling high-level ECOWAS envoys that “as soldiers, their work is in Guinea and there is nothing to freeze in their accounts,” junta spokesman Amara Camara said at a briefing.

During an Extraordinary Summit in Ghana, Liberia’s President Dr. George Manneh Weah among others called for the release of Guinea’s ousted leader, Alpha Conde; a review of ECOWAS’ protocol on democracy and good governance in order to prevent the manipulation of constitutional term limits in the national constitutions of member states.

But he said this should be done with due regard for the “contentious matter” of sovereignty and non-interference.

The Liberian leader made these assertions when he spoke at an Extraordinary Session of the Authority of Heads of State and Government of the Economic Community of West African States (ECOWAS) held in Accra, Ghana on September 16, 2021, according to an Executive Mansion statement. The meeting was called to discuss the military takeover in Guinea.

President Weah’s statement is a reaffirmation of a previous position he made on the matter during a virtual ECOWAS meeting recently.

At last Thursday’s meeting, the Liberian Chief Executive welcomed the reopening of the Guinean border with Liberia and repeated his call for the immediate release of President Alpha Condé.

He said ECOWAS should commission a “detailed and systematic rapid study” on the lessons learned from the situation in Guinea in order to get a better understanding of the causes of coups in the region and how they can be avoided.

Meanwhile, following the deliberation of a report from the High-level mission to Guinea, the West African leaders decided to uphold the suspension of the country from all ECOWAS governing bodies until the restoration of constitutional order.

The body also agreed to impose a travel ban on all members of the National Rally and Development Committee (CNRD) and their families.

The ECOWAS meeting which was presided over by Ghanaian President, Nana Addo Dankwa Akufo-Addo, with over a dozen heads of state in attendance, also agreed to freeze the financial assets of the CNRD and called for the establishment of a political transition for a period not exceeding one year.

Guinea was plunged into political uncertainty on September 5, 2021, when soldiers under the command of Col. Mamady Doumbouya, commander of that country’s Special Forces, ousted President Alpha Condé, who has led the country since 2010.

Since the coup, the military that says Conde is alive and well, has been holding the deposed president in an undisclosed location.