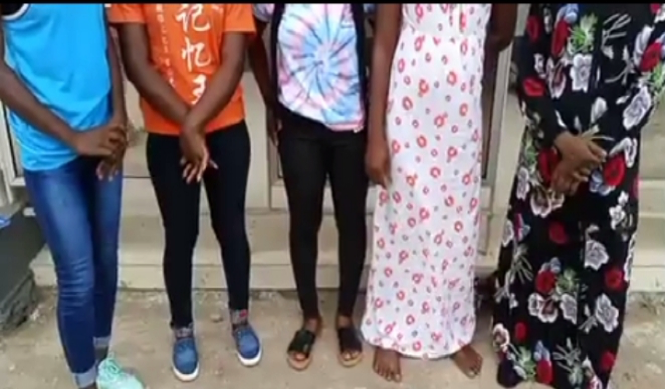 Despite the government’s and partners’ attempts to combat the crime, human trafficking has become a striving business in Liberia. Some Liberian women who just returned from Oman with the assistance of the Liberian government have made shocking allegations about the horrific treatment they received there.

Oman, formally the Sultanate of Oman, is a Western Asian country on the Arabian Peninsula’s southeast coast that relies on diminishing oil resources for 84 percent of its revenue.

Speaking to reporters on Tuesday, April 19, 2022 in Monrovia, Mary (Penname) said that she came back to Liberia with nothing to start over, but was happy that the government came in to rescue them.

She said life in Oman was not easy and she cried on numerous occasions, begging her family back in Liberia to help her leave Oman.

She said it was an agent in Liberia that encouraged her, along with other women, to go to Oman and make life better by working to earn more money to take care of their family and children back home.

Rose (penname) told reporters that she was encouraged by a friend in Barnesville to go to Oman to work and earn money that would help her go back to school and achieve her dream of becoming a nurse.

Rose further said that her agent told her that US $500 was going to be her monthly salary, adding that she was not informed about house keeper work.

Rose said, “In Oman, I was responsible for taking care of 7 bathrooms, 6 bedrooms, and 3 living rooms every day, which was very stressful for me to the extent that I called my agent and told her I wanted to come back home and everything she told me was a lie,” she said.

Rose indicated that her boss refused to send her back home because he paid US $6,000 to her agent to bring her to Oman, and if she gives back his money, she will definitely be free to go home.

She told journalists that her stomach started to swell and that a friend took her to Labor Court in Oman, but the court called her boss and he ordered that she be placed behind bars for six months, which the court did.

According to her, it was a counselor in Dubai who she got in contact with through a friend who helped her provide evidence against her boss from love messages that he usually sent her that helped her get out of jail.

Rose said it was the same counselor who helped with paying back her boss’s money that was spent to get her to Oman.

She then called on humanitarian organizations to help them in order to restart life in Liberia.

Grace (penname) said it was a lady in Red-light Market that told her about a job opportunity in Oman with an NGO and that was how she was encouraged to get her passport and police clearance.

She said the agent told her that she would be working and going to school while earning US $800 as her monthly salary, but was never informed about the housekeeper job in Oman.

“When I reached Oman, the boss’s daughter was the one that took me from the airport, and I was taken to their house and given a room under the house step to sleep in, which surprised me”.

Grace further explained that her boss informed her that her salary was US $170 and, after working for a few days, she started to complain that work was too much for her and demanded that she wanted to come back home.

“I started complaining about work and crying that money was small, which made my boss vex to the extent that he took rope from his car, tied me and beat me. That led me to faint, and he took my passport, formatted my phone and made me worked like a slave,” she said.

According to Grace, her boss stopped giving her her monthly salary and when she asked for her phone and refused to work, her boss again beat her.

Due to ill-treatment from her boss, she was forced to jump over the fence, which is not long, and started running for almost three hours before meeting a man who helped carry her to the police station.

Grace said that at the police station, she met her boss’s son, and he started beating me in front of the police and nabbing me, but the police refused to do anything because my boss sponsored my coming to Oman.

She narrated that her boss later turned her over to the agent that brought her to Oman, and it was through the help of a friend that got her in contact with the counselor that helped her return home.

The women are calling on the government of Liberia to come to their aid by providing some financial assistance to help them get back on track in order to sustain themselves.