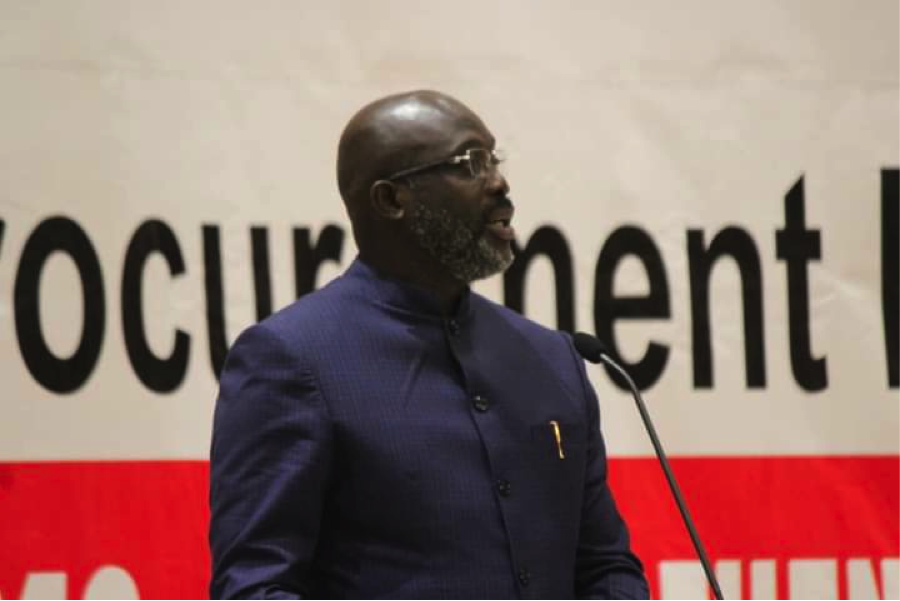 President Weah has cautioned the Commissioners and Executives of the Public Procurement Concession Commission (PPCC) to not stall national development effort because of personal interest.

“As it is often said, he who seeks Equity must come with clean hands,” He said.

President Weah made these statements on Wednesday, December 1, 2021 during his official opening message at the Third Annual Public Procurement and Concession Forum held at the Ministerial Complex in Congo Town.

The forum is being hosted under the theme: “Innovation and Reforms- strengthening Liberia Public Procurement System”, from December 1-3 2021.

He also urged the PPCC that all reviews of procurement issues must be free, fair and according to the laws of Liberia, emphasizing that they should not use their positions to favor one group over the other.

According to him, promoting self-interest over the interest of the society is unacceptable, urging them to put their country first in order to achieve developmental goal.

President Weah also recognized that over the years the PPCC has presented itself as a vital institution to Liberia’s governing process for which he is pleased for the conduct of the forum in order to review the crucial work that it does on behalf of the Liberian people.

He noted that it is important that PPCC review and make assessments of what need to be done to improve it’s effectiveness.

Speaking further, he claimed that PPCC is central to his administration’s drive to bring integrity to the overall governance process.

“I am delighted of being invited here today to open this forum,” he said.

The Liberian Leader maintained that PPCC has managed to ensure that the already scarce resources are effectively and judicially managed that contracts and concessions meet all requirements in accordance with the law which become necessary due to the aftermath of the civil war when the systems broke-down along with the country infrastructure.

President Weah appreciated PPCC for helping to restore some confident in the system while at the same time combating impropriety.

He therefore encouraged them to continue their drive to bring integrity and efficiency to the procurement process despite the enormous challenges they are faced with, which include medical resources and push back for some government institution and others.

He disclosed that the Liberia Anti Corruption Commission (LACC), PPCC and other anti government institutions have been given renew focus by his administration in the effort to improve their capacity and facilitate their work.

“I am therefore glad that this forum brings together all the stakeholders to brainstorm on the way forward. I urge you to consider all the issues in the next few days that bring improvement to the way they do their work and ways his administration can help,” he said.

For her part, the Chief Executive Officer of PPCC, Atty. Jargbe Roseline Nagbe Kowo in a welcome statement and giving the overview of the Forum, she said that the Forum is all about way forward on strengthening the public procurement system in Liberia.

She stressed that the formulation of the Public Procurement Concession Act (PPCA) of 2005 was an important government tool for the public procurement regime in Liberia for reforming and creating avenue to obtain accountability for public fund, transparency, upholding the value for money, standard and what the laws dictate.

She said the act was amended in 2010 and there are issues of concerns that could make the public Procurement System better. She said in similar manner in 2008 as well as 2016 the first and second forums were conducted to access the progress of implementation of the PPCA of the States and there were some reforms in term of making and creating standard that will better the system.

She asked everyone to incorporate governance in their various work responsibilities, stating that “can we lead as example as head of entity by embracing compliance law, I say yes we can, should we work together to achieve the objective under pillar four of the PAPD that highlights governance and transparency, yes we should.”

Atty. Kowo told the gathering that the presence of President Weah at the opening of the Forum was a wakeup call for compliance to the public Procurement laws of the States, which she said is important for the country.

She concluded by saying “together we must walk the compliance chain for our nation’s growth and development.”

“Disability Is Not Inability”