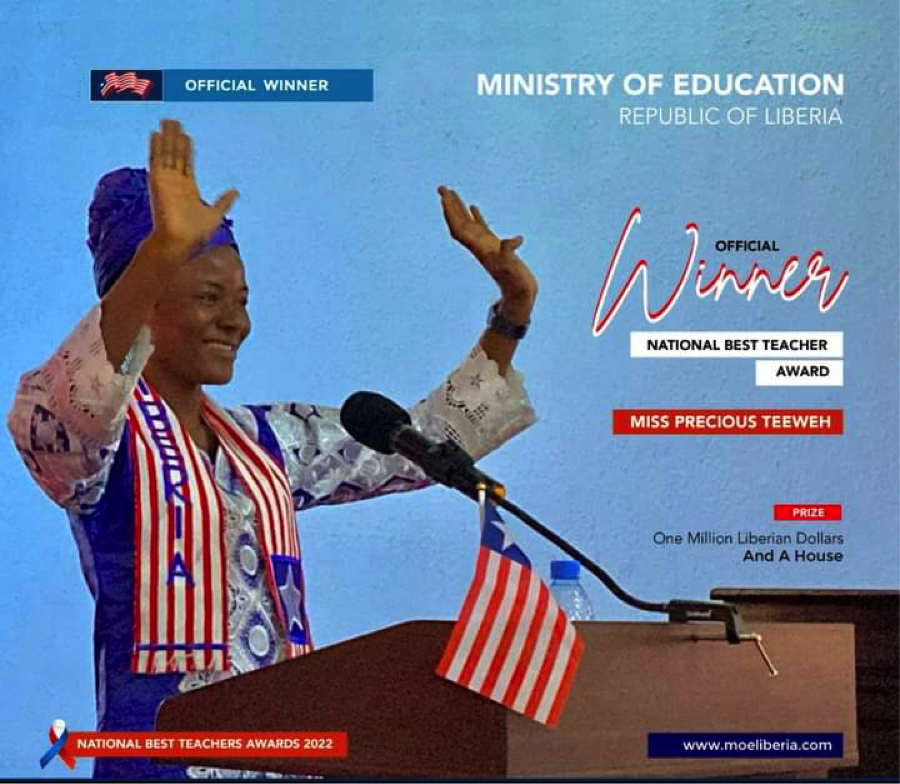 The 26th of September, 2022, on Capitol Hill in Monrovia, Liberia: After receiving backlash for the decision to name Miss Precious Teeweh as the recipient of the 2022 Best Teacher Award, Deputy Education Minister Latim Da-Thong defended the choice, praising the young woman for her brilliance and stating that the award was well deserved.

The controversy surrounded the selection of Miss Precious Teeweh as the recipient of the award.

During a news conference that took place over the weekend, Deputy Minister Latim Da-Thong responded to members of the public who had questioned the procedure for awarding the title of Best Teacher. He emphasized that, according to the report that was presented to the Ministry by the independent body firm that was hired to oversee the procedure, Precious Teeweh was the only participant that met all of the necessary requirements.

According to what he had stated, “Being the best teacher does not need you to be in the classroom for fifty (50) years,” but rather a particular set of qualifications that had been established by the committee.

Because Precious has already authored two books for young children, both of which have been approved for use in classrooms by the Ministry of Education and are scheduled to be published within the next few weeks, he believes that her enthusiasm and dedication to education are unparalleled.

Nevertheless, he went on to underline the fact that the young female educator has a strong commitment to the field of education and is someone on whom he believes Liberia may count in the years to come.

He admitted that there are elderly teachers in Liberia who have worked in the classroom for a number of years, but he said that many of these teachers did not take part in the process, and those who did take part in the process did not meet the requirements. In the end, the young female instructor emerged victorious over all of the other candidates, coming in first place in every category.

The Deputy Minister of Education, Latim Da-Thong, took the opportunity to express his delight in Liberia’s early childhood educators, emphasizing that the country has a bright future thanks to the upcoming generation of young educators who have a passion and devotion for the teaching profession.

Ms. Precious Teeweh, a teacher at a private school, was recognized as the recipient of the 2022 Best Teacher award during the celebration of Flag Day that took place this year. As part of the prize, she was awarded a golden prize consisting of one million Liberian dollars and a house with two bedrooms. This fact can be cited.

Many of Precious’ supporters feel that she is well-deserving of the prize and that it comes at an opportune moment because of the unwavering passion and attention she has shown to the educational sector of Liberia, particularly in the area of early childhood education.

In March of this year, the program for the 2022 Teacher Award got under way. At that time, teachers and administrators from all Liberian schools from kindergarten to twelfth grade, including public, private, faith-based, and community-based schools with permits from the Ministry of Education were identified as qualified candidates for the competition. The competition was open to teachers and administrators from public, private, faith-based, and community-based schools.

At the formal program held to celebrate the 175th Flag Day Celebration, which took place at the Centennial Memorial Pavilion in Monrovia, a total of 32 awards were presented to the winners.