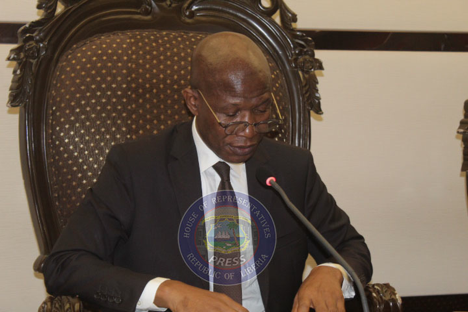 Ahead of the Christmas celebrations, the House of Representatives has finally adjourned its Special Session; conducting a total of (33) Thirty Three Sessions; including (18) Eighteen, (12) Twelve Executive/Secret and (3) Three appearances of Ministers or Directors.

Giving a statistical report Tuesday, December 21, 2021 during its 20thDay Sitting of the Special Session of the Honorable House of Representatives of the 54th National Legislature, Speaker Bhofal Chambers disclosed that a total of (39) Thirty Nine Bills were introduced.

According to Speaker Chambers, of the (39) Thirty Nine Bills, (23) Twenty Three were passed by the members of that august body during the period under review.

The House Speaker further clarified that (15) Fifteen of the bills passed emanated from the Executive Branch of the Liberian Government, (7) Seven from the House of Representatives and a Joint Resolutions also from the House.

Meanwhile, Dr. Chambers revealed that a total of (16) Sixteen Bills are currently in committee room; adding that (5) Five stems from the House, (7) Seven from the Executive, (2) Two from the Liberian Senate; including a petition and a communication from President George Weah for legislative consideration.

Speaker Chambers used the occasion to thank members of the House of Representatives for their tireless efforts in working in the best interest of the Liberian people.

The lawmakers are expected to resume normal legislative activities on the second working Monday of January 2022 in keeping with the constitution of Liberia.