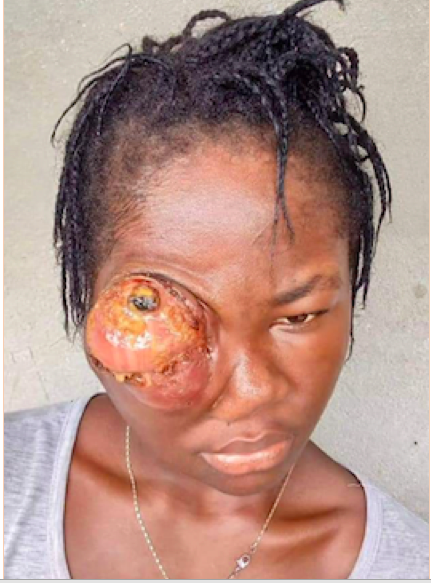 … A 16-year-old minor cries for help over eye complications.

Due to the severe pain she has been experiencing for the past three months, Fatumata Boakai, who is 16 years old and from Jartono Town in Browerville, said she could die if she did not get financial assistance to seek advanced medical treatment outside of the country. Her eye is gradually falling out of its socket.

She told the Women’s Voice newspaper that she was admitted to the John F. Kennedy medical center in June, but that she was discharged without surgery and treatment because her mother was unable to provide the money requested by the medical doctors. This statement was made early on Thursday, August 4, 2022.

Ms. Boakai stated that she awakened and noticed that her eye was scratching, but she didn’t pay much attention to this since she believed that she had an infection of the eye.

She had been experiencing persistent discomfort and itching for several days prior to being taken to Redemption Hospital, where she was informed that it was just a common infection of the eye and given merely an eye drop for treatment. Despite this, she did not have a favorable response, which is one of the factors that led her to seek more medical treatment at JFK.

She claims that physicians at the John F. Kennedy medical center told her that the eye problem was caused by cancer and that it required immediate treatment in order to be resolved before it spread to the other eye.

She went on to say that the physician had informed her that the operation could not be performed in the nation, but that the hospital could make the necessary preparations for her to be transported overseas for a more advanced medical procedure on the eye.

She added that she and her parents had been evicted from the rented home they had been living in due to the condition she was in.

Little Fatumata said because of her illness, the land lord has requested they leave their residence immediately. They are quite concerned that it may harm their children.

She is appealing to the government, charitable groups, and individuals in Liberia who have good intentions to assist her in obtaining medical treatment outside of the country.

The Ministry of Defense has announced the arrival of a contingent from the Armed Forces of Liberia in the Ivorian City of Yamoussoukro to participate in the country’s National Day celebrations.

Ivory Coast is expected to observe its 62nd Independence Celebrations on August 7, 2022.

According to the Ministry, the delegation which is headed by Deputy Defense Minister for Operations, Prince K. Vincent, includes the Armed Forces of Liberia Chief of Staff, Maj/Gen. Prince C. Johnson, III, and Assistant Minister for Public Affairs, Sam K. Collins.

“This is the first time that the new Liberian army has been invited to participate in the Ivorian Independence celebrations,” a release from Ministry said.

The Armed Forces of Liberia is the only foreign military that is expected to participate in the parade of troops doing the Independence Day celebrations of the Ivory Coast.

Since the arrival of the AFL contingent in the Ivory Coast, they have been involved in rehearsal drills ahead of the main program.

We have nowhere to go if Buduburam Refugee Camp is demolished