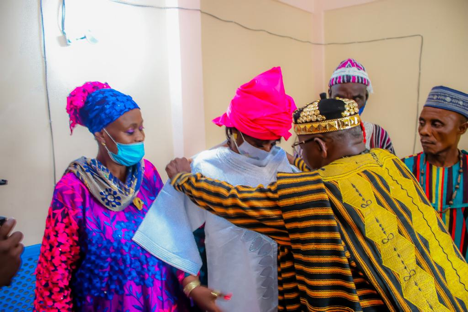 It was a beautiful moment on Wednesday, December 15, 2021 at the Headquarters of the National Council and Chiefs And Elders of Liberia (NCCEL) on MacDonald Street when traditional leaders from the 16 tribes of Liberia came together to honor the Executive Director of the Liberia Crusaders for Peace (LCP) Ambassador Julie Endee for numerous services and dedicated hard work she continues to render to the country.

Queen Juli Endee as head of Liberian artists recently excellently performed at Dubai Expo 2020, based upon which many Liberians in and out of the country including foreigners admired them.

Subsequently, the NCCEL headed by Chief Zanzan Kawor taught to honor Amb. Endee for her enthusiasm, dedication and hard work in making sure that the trip to Dubai was successful and most especially for the excellent performances at the Dubai Expo which has put Liberia on another world stage.

In special remarks at the honoring ceremony, Chief Kawor indicated that they couldn’t allow the day go by without honoring Amb. Endee, emphasizing that she turned her back on the book that she learned and focus on the indigenous people because of the love she has for her country and people.

According to Chief Kawor, Amb. Endee is always ready to work and support any government that comes to power. He said it is based on that she put all of her energy to make sure that Liberia be represented at Dubai Expo 2021.

The Country’s Traditional Father said that after he heard about the wonderful and excellent performances Amb. Endee and the others did in Dubai he was excited and proud.

He stated that “It is not Juli that won but Liberia so, I want to appreciate my daughter, and, on behalf of the Council and with the power vested in me as father of this country, I gown you, my daughter for the hard work you continue to do for Liberia, let God bless you and anything you put your hand into”.

Chief Kawor also appreciated President Weah for supporting the team to perform in Dubai.   He as well praised Amb. Finda Bondoo who he said was there to make sure that Amb. Endee and the others met the President before departing for Dubai.

He then thanked his fellow traditional leaders most especially the women for adhering to his call to come and honor Amb. Endee.

“I knew that Amb. Endee going to Dubai cannot be a failure,” he said.

He used the time to call on the Government of Liberia to empower Amb. Endee so that she can be able to run the affairs of the LCP effectively.

Also speaking the National Coordinator of NCCEL, Madam Setta Fofana Saah said that Amb. Endee and the others brought proud to Liberia. She said because Ambassador Endee put her time into the Dubai’s trip, it led to great performances that the entire world is talking about today.

Madam Saah stressed that because of the performances and the time Amb. Endee and the others put towards the trip, Chief Kawor taught to appreciate her.

“So, it is what she has been doing and continue to do that brought about this honor. We are here to honor Queen Endee and appreciate what she is doing in this country and we pray that God give her long life, wisdom and support for her to continue to work for her country,” she said.

According to him, God created everyone with a star and that star can keep you going, stressing that if that star is dimmed from the beginning there will always be darkness but if the star is bright many people will see and follow as such Amb. Endee is that star.

He appreciated the Traditional Queen for her services to the country.

He added that if you were star for many people your heart would always be open.

The RiverGee Traditional Father told the gathering that they have heard about all the good things Endee has been doing and, especially about her recent trip to Dubai, which they are happy about, and what to appreciate her.

He also urged Ambassador Endee to continue to be role model to their daughters across Liberia so that they can learn from her.

He at the same recognized the traditional women for their hard work and thanked Chief Kawor for holding the Council together.

In response to the honor Queen Endee said she was surprised at such an honor but when it comes to the traditional people the surprise does not last for long because she knows them.

She gave God the glory for sparing her life in 2021, emphasizing that 2021 has been a challenging year for her when she lost her mother and she got seriously sick, but with the help of the church and her traditional people she is alive today.

“I want to say, Chief Zanzan, thank you, but if I knew this plan was in place I was going to bring all the artists and the people that travelled with us to Dubai because we did it together but since the traditional people called me on behalf of those of us that went to Dubai and performed, I am grateful, but it would have never and ever being possible for us to deliver the kind of performance we did in Dubai without the support of President Weah,” she said.

Amb. Endee mentioned that if President Weah were like other President they would have never gone to Dubai.

According to her, on the night they were leaving for Dubai, they went to Pres. Weah to just ask for blessing and it was during that blessing when Pres. Weah made the show in Dubai a success.

She maintained that all the challenges they were faced with it was that night that Pres. Weah settled everything for them to go to Dubai.

“Then I asked myself if that night we went and Finda was not there to carry us to the President how we were going to manage. It was Amb. Finda Bundoo, no wonder they call her ‘Rescue mother. Rescue Mother was the one who went to the President and said Juli and her team outside and they want to get your blessing. That is how the President sent for us,” She told the traditional leaders.

The Traditional Queen added that when Pres. Weah was playing football she knew him and she knows that when you went to him what he would do when he was a footballer.  So as such, being President of the country they went to him and they know what he did that carried them to Dubai and today everybody came from Dubai happily.

She told Chief ZanZan to tell the President thank you when he sees him as well as Amb. Finda Bundoo.

Amb. Endee noted that now they are back but they are faced with lot of challenges but with God above they will prevail.

“The Traditional women came to my birthday with goat, oil, 10 bags of rice, lappas and said it is from the Traditional Council so, except Chief Zanzan you want give me more. But remember that I told you that am not alright, I am not happy and you said we will talk it but to bring me here today and put this white gown on me to appreciate what we have been doing and continue to do, I thank God and everything from my heart I let it go. The things that was in my heart and the decision I wanted to take but you called me today and put this white gown on me I forgive everything,” she told Chief Kawor.

She used the ceremony to thank the Crusaders for Peace family for their support toward her. She at the same time thanked the Minister of Commerce, Mawaine Diggs and City Mayor of Monrovia, Jefferson Tamba Koijee for their support on the trip.

“I take this honor as a blessing to follow me and give me the energy and time to do what I have to do. I want to thank all those young artists that went with us, they were able to behave well and we came back to Liberia safely, I thank God for that and they did very well,” she said.

Amb. Endee disclosed that they did four performances in Dubai and every one of those performances was at class A and she is very grateful to God.