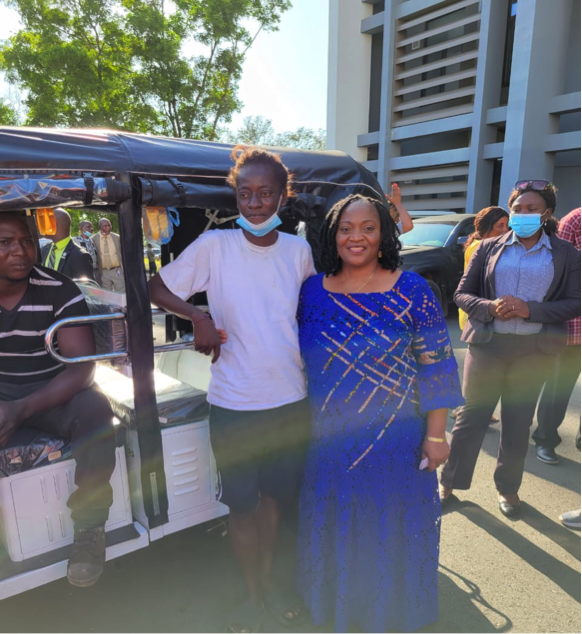 Vice President Jewel Howard-Taylor has donated a tri-cycle (keke) to a disadvantaged young lady only identified as Monique, in fulfillment of promise she made in 2018 at a “Thank You” luncheon she organized for zogos after 2017 elections.

Making the donation on Tuesday November 2, 2021 on the grounds of the Capitol Building, Madam Howard-Taylor said about three years back after the presidential campaign, she agreed to Monique’s request for a keke, which she could use to help others, and for income.

Monique is a member of disadvantaged young Liberians who are commonly referred to as ‘zogos’ (meaning people who are addicted to drugs and disadvantaged).

VP Howard-Taylor said she keeps promises that she makes to people in keeping with her value as Christian. “In my Church, they called me promise keeper when I promise people I do it”, the female politician said.

CDC Vice Standard-bearer said she was over joyed to have met Monique when she went to visit students she sponsors at College of West Africa (CWA). The Vice President said she immediately requested that Monique be brought to her office to receive a brand new keke.

In response, Monique said she was grateful and thankful to the VP for keeping her promise and vowed to leave the street.

“A promise fulfilled…Today I remembered a promise made to a young disadvantaged young woman by the name – Monique.  I met her in January 2018; when I decided to hold a luncheon for a group of disadvantaged young people in Monrovia.  During this program she stood up eloquently and learned; and spoke on behalf of the others. She spoke of how they made up their minds to Vote for President Weah and I; kept their promise and delivered the votes to us both. She further intimated that though they were called Zogos, named because of their unfortunate circumstances they voted the both of us, so that we would work to transform them and changed their lives for the better. They hoped, she said, we would keep our promise to them and the Nation. She then requested a keke which she could use to help others and for income. I made a promise to her that I would…however I like other humans forgot. But there is a day for every prayer to be answered and today, November 2, 2021 was her day. As I was leaving the CWA High School; I heard someone shouting my name…when I turned to look, behold it was her. I was over joyed as I asked that she be brought to my office so that I would fulfill my promise to her. I am so pleased that I was able today to make good a 3-year pledge to a young woman who believed in my words. This is the true value of leadership…keeping your promises. Thank you Monique”.