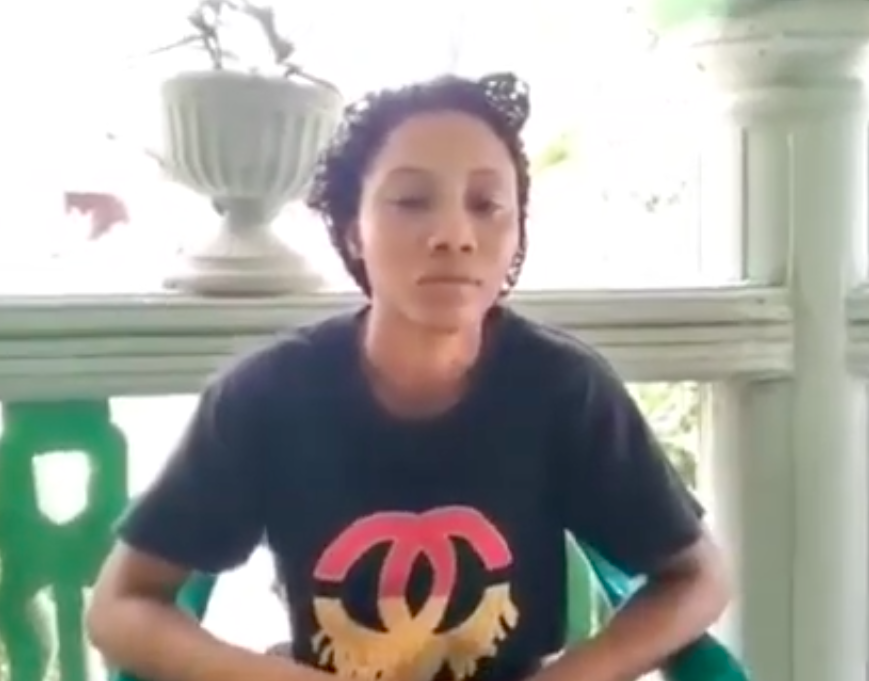 On the heel of recent report by local dailies, a woman who alleged to have been sexually abused by the father of her two children has flip flopped on the allegation.

In the story, captioned under the headline: “Self-Proclaimed Rights Activist Accused of Sexual Harassment by Former Female Colleagues,” Font-page Africa and online media reported how 21-year-old lady, Isatu Dweh alleged that she was raped by one Daniel Dennis, who many consider a rights activist against corruption and abuse.

The Media report furthered that Ms. Dweh alleged that she was only 16 years of age when he (Dennis) allegedly abused her sexually and, subsequently fathering a now five-year-old daughter with her.

Among other things, it was reported that Dennis, who is the president of Student Against Corruption (SAC), now has two children with her (Isatu) and has reportedly abandoned them (children) with her.

But within barely over a month, the 23-year-old Isatu is now denying ever being raped by the student activist.

In an interview with reporters and also in her latest YouTube video, Ms. Dweh said contrary to previous allegation that she was being raped or sexually abused, such never happened to her, adding that the interview was done in November when she was called to go Gbarnga by Eric Wowoh in the name of him providing her college scholarship.

“Daniel is my children’s father and we started loving when I was at the age of 19. He didn’t force me into love; it was willingly done because I loved him with my whole heart. In fact, I was forced by one Eric Wowoh to lie on ground that there were some scholarship opportunities for people in that category. So he asked me to take advantage of that opportunity and the only way of doing so was to place myself in that category; that I was sexually abused when I was under age. But I regret my action,” explained Isatu.

“I lied under pressure, but I was never given the scholarship as Eric Wowoh promised me. He only gave me money for me to pay my way to go Gbarnga and he even brought me brand new phone. I didn’t know that he had some issues with Daniel. He only told me that he was going to give me scholarship, and he needed such story that was going to encourage his white partners to give me the scholarship. And the story was I should say I was 16 years when I was forced into a relationship by Daniel,” she indicated.

“FrontPage Africa was right with the story. I actually said those things from which FrontPage Africa did the story, but I was forced to lie for the sake of obtaining a college scholarship. He also told me to lie that I dropped out of High School which is not true, I graduated in 2017 from high school and I was never a member of the Students Against Corruption, as I said earlier, I regret my action, and I am willing to tell the world that Eric Wowoh made me to lie that I was sexually abused. As I speak to you, Daniel and I are still friendly, even though we are not into any loving relationship. Again, I was not forced into love by him.

Eric Wowoh is the Founder of Change Agent Network a USA based nonprofit organization and a permanent residency in the United State, the organization that owned the Alexandria A. Andrew Academy. It can be recalled that Students Against Corruption in Alexandria A. Andrew Academy raised sexual abuse and exploitation allegation, which led to the dismissal of Abel Dennis the Principal, Kofi Mensa the Dean of Student and Isaac P. Bettie.

Eric Wowoh is currently in the US and has been suspended by the board of the organization he Founded, Change Agent Network, following report of sexual abuse by the Students Against Corruption and some female students. The head of the Change Agent Network Board, Dr. Stefania Forte is currently in Liberia leading an independent investigation and Eric Wowoh is required to stay in the US while she lead the investigation.

“Women involvement in the military makes the AFL stronger”