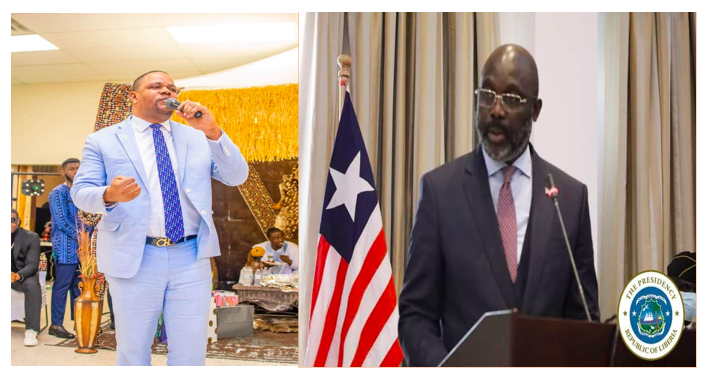 The Ministry of Justice has repeated President George Manneh Weah’s recent olive offer of peace to talk-show presenter Mr. Henry Pedro Costa, inviting Mr. Costa to return to Liberia and live freely like any other citizen.

“In accordance with the President’s olive branch of peace, all criminal accusations, including but not limited to any and all formal criminal investigations against Mr. Costa, are hereby dropped, and Mr. Costa, like any other Liberian citizen, is free to return home whenever he likes,” the release said.

Mr. Costa’s broadcast equipment was seized through the appropriate court process as a result of his willful and deliberate violation of the constitutional freedom of expression, and the release urged him to use the presidential olive branch of peace to live and operate within the law by raising the standards of his advocacy beyond the borders of recrimination and misinformation for the country’s progressive development.

As a result, Cllr. Frank Musa Dean Jr., Minister of Justice and Attorney-General, has directed the Department of Prosecution to cooperate with the court to guarantee that Mr. Costa receives his broadcast equipment, which was seized on court orders based on an application filed by the Liberian State.

The release, however, clarifies that the question of acquiring and operating a radio frequency squarely lies within the operational provinces of other agencies of the Liberian government, which, as part of their own statutory rules, procedures, and responsibilities, have put in place the requisite requirements and processes for radio frequency acquisitions and management by individuals and institutions.

The release calls on other social commentators and political advocates using various platforms to market their views to bear in mind the solemn policy of the government to reconcile and re-unite the people and develop the country for the good of all Liberians and urges them to be more critical but responsible in holding public officials to account on issues rather than using their various platforms to sow seeds of discord and disunity to the detriment of the state.

The Ministry of Justice reminded everyone that it would not sit idly by and allow anyone to hijack or swamp the democratic space with lies, invectives, and misinformation for personal gain.

Response, Costa said he welcomes the move, describing it as swift fulfillment of President’s Weah promise to him in a phone conversation.

“ A short while ago, the Ministry of Justice issued a press release stating that I am now a free man and may go home (Liberia)as I please. Also, the press release states that our radio broadcasting equipment and recording studio equipment worth approximately US$ 70, 000 that were seized by the government when they shut down our radio station in 2019, will be returned to us!” Costa said on Social Media.

“This move is in line with President Weah’s commitment that he made to me when he called me a few days ago. I welcome this swift fulfillment of his promise, and I shall be speaking to it further in a live podcast later,” he said.

Costa called his supporters that it is a major victory for the and for democracy, stating, “We shall continue to advocate for you and fight for a better Liberia for us all”.