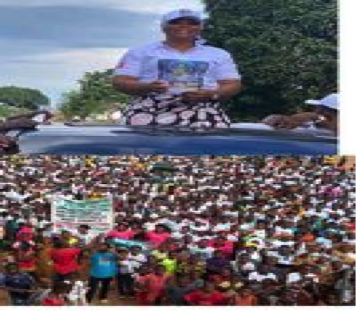 – Finda Lansanah on her way to Capitol Building

Provisional results coming from the just ended by-election in Bomi County puts lone female candidate Finda Gborie Lansanah far ahead of her male counterparts, with the widow of former Bomi Senator Laiha Lansanah reportedly being in a commanding lead ahead of eight others.

Liberians in four districts in four of the country’s 15 counties went to the polls Tuesday to fill vacant seats in the House of Representatives.

Senator Snowe, whose election to the Liberian Senate during the 2020 mid-term senatorial election created the vacancy in District # 1. So, in an apparent reciprocity to the widow of the man who supported his senatorial bid, the Bomi Senator is backing the candidacy of Madam Lansanah the vacancy seat in the House for Bomi electoral district # 1.

According to the National Elections Commission (NEC), there were only two (2) females out of thirty-three (33) qualified candidates contesting for the four vacant seats.

Ms. Abigail Kou Freeman competed with 11 male candidates in Nimba, where she and others are trailing behind Prof Francis Maweah of MDR and Mr. Samuel Brown, an independent candidate, according to provisional results received by Women Voices.

“I pray for strength and wisdom. Before I thank anyone, let me firstly thank the people of Bomi and to our Senator, Snowe,” Madam Lansanah told a local radio station late Tuesday, adding, “When I go to the House, I will focus on 30% Bill for women representation. My win comes from the women of Bomi they said this was the time for a woman.”

Bridge Liberia calls for increased number of girls to be educated