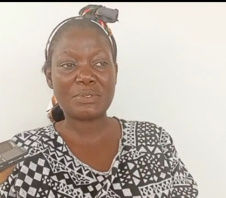 A man named Joseph Blama has been reported missing in Grand Bassa County, where he and his wife had gone to seek God’s face for fortune through a devout woman named Mother Martha Doe.

Madam Isatu Blama, the wife of Mr. Joseph Blama, told the media on Tuesday, April 5, 2022, at her home in the ELWA Community, that it all started when her husband began going to prayer centers for blessing for job.

Madam Blama claims that things have been difficult for her and her husband since they married seven years ago due of her husband’s unemployment.

She stated that she and her husband had been visiting to churches in search of a breakthrough the difficulties they were experiencing until her coworker, Josiah Diggs, directed her to the Mother Martha Doe Prayer Center.

She went on to say that Josiah Diggs confirmed that Mother Doe was the one who prayed for him, and that he was able to get the job he has now thanks to God’s help.

“After Josiah gave me Mother Doe’s number, I placed a call to her and she agreed to pray for my husband to get a job after a three-day fast and prayer which was conducted from March 14-16, 2022,” she revealed.

Madam Blama noted that the fast and prayer service were slated for March 14–16, 2022, adding that “which was from Wednesday to Friday, but I received a call from Mother Doe informing me that my husband got missing and that Mother Doe did not know how it happened.”

She said, “After I got the information of my husband’s absence, Mother Doe immediately denied me from coming to the Prayer Center in search of him, and she told me to meet her at a different venue instead of the Prayer Center. I went to the venue and met Mother Doe, and she told me that if I tell anyone that my husband has gone missing, I will never get to set my eyes on him again.”

Meanwhile, Madam Blama is calling on the Liberia National Police (LNP) to speedily launch an investigation into the matter.

At a press conference held by the Ministry of Information, the Liberian National Police claimed they couldn’t comment on the topic because it was under investigation. Up to press time, no arrest has been made.