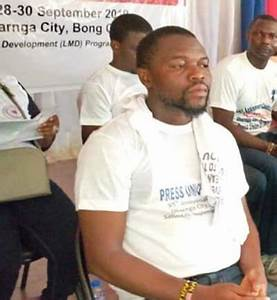 Ganta: Ahead of Liberia’s 2020 special senatorial, representative by-elections and national referendum slated for December 8, 2020, the Press Union of Liberia (PUL) has conducted a two-day elections coverage training for journalists  in Ganta, Nimba County.

The training which brought together over 20 media practitioners from four counties in Liberia, was held from the 9th to the 10th  of November 2020, under the theme: “Enhancing Journalists Capacity to report on the 2020 special senatorial election.”

One major challenge in the conduct of peaceful elections in Africa especially Liberia is unprofessional information sharing to on electoral matters.

According to PUL Vice President Daniel Nyakonah, journalists from Grand Gedeh, Bong, Lofa and Nimba Counties were drilled in research-based Journalism and storytelling, conflict sensitive reporting during election, gender balance in elections coverage among others.

“The training in Ganta is the second regional training organized by the Press Union of Liberia. Internews Liberia Media Development Program with funding from USAID supported these initiatives,” Mr. Nyakonah disclosed.

He said, the training aims to add integrity to the works of journalists in the upcoming 8 December elections.

Meanwhile, participants at the two days event were excited and lauded the Press Union of Liberia for what they described as a wonderful initiative, promising to apply everything they have learned to the coverage of the December 8, special senatorial, representatives by-elections and national referendum.