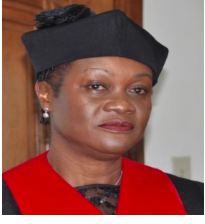 The nomination of Justice Yuoh is in accordance with Liberian Constitutional Article 72b, which states that “the chief justice and associate justices of the supreme court and judges of the subordinate court of record shall retire at the age of seventy; provided, however, that a justice or judge may continue in office as long as may be necessary to enable him to render judgment or perform any other judicial duty in regard to proceedings entertained by him before he retires.”

Come September, Justice Francis Korkpor, the outgoing chief justice, will turn 70 years old. The opinions and other functions of the supreme court cannot be written or carried out by a single justice of the full bench of the supreme court, even though he may, in accordance with the second paragraph of article 72b, have some judicial functions.

In the meanwhile, the president’s nomination of Associate Justice as Liberia’s next chief justice is consistent with expediency and will allow the court to complete its transitional formalities.

The supreme court of Liberia has the power to decide all constitutional disputes in the nation in accordance with Article 66 of the constitution, and its judgments are final and cannot be appealed to any other court.

With the approval of the Liberian senate, the president has the power to appoint a justice to the supreme court.

The president shall nominate and commission the chief justice and associate justices of the supreme court with the approval of the senate, provided that the person thus appointed is a Liberian citizen of good moral character and must be a councilor-at-law of the supreme court bar.

Justice Sie-A-Nyene Gyapay Yuoh’s nomination follows a public debate on the most qualified person to take the Liberian judiciary to a point where justice will be served without raising public concerns about the judiciary’s objectivity.

Justice Yuoh, the designated chief justice, graduated from Louis Arthur Grimes in 1981 and joined the supreme court bar in 1988 as a councilor-at-law. For young girls all around Liberia, her singular portrayal as a lawyer remained an inspiration.

As assistant minister for legal affairs, Justice Sie-A-Nyene Gyapay Yuoh started her public professional career with the ministry of justice in 1983.

From 1988 until 1990, she oversaw African issues at the Ministry of Foreign Affairs.

As a lawyer, she continued to provide public service in Liberia’s economic sector, serving from 2000 to 2003 as cooper secretary or legal council on the board of governors of the country’s central bank.

Later, from 2011 to 2013, she worked for the Liberia Law Reform Commission as an acting executive director and commissioner, respectively.

She also expanded her professional life into the private sector between 1994 and 2000, working as an associate and legal councilor at the David A.B. Jallah law company.

She proudly served as vice president for four years, from 1994 to 1998, of the Liberia National Bar Association (LNBA), where she was a practicing attorney.

In addition to being a founding member of the association of female lawyers in Liberia and acting as its first vice president from 1997 to 1998, she is a supporter of women’s emancipation.

Later, between 2012 and 2013, she kept up her involvement with the Liberian National Bar Association by serving as chair of the judicial committee.

Justice Yuoh presided over the Maryland County Local Bar Association prior to her appointment to the Supreme Court in 2013.

Her nomination to the position of chief justice of the supreme court on August 23, 2022, is still pending confirmation by the Liberian senate, which must do so in accordance with article sixty-eight of the Liberian constitution.