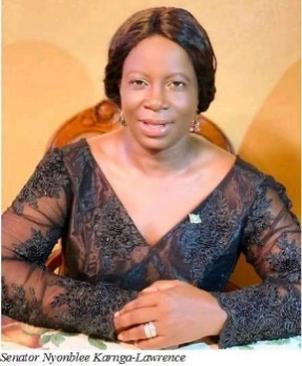 The Voice of females at the Liberian Senate, Nyongblee Karnga-Lawrence, from all indications, is poised to defeat former Foreign Minister,Gbehzohngar Findley, in the 2020 senatorial race in Grand Bassa County.

It is an open secret that the Senator Lawrence continuous to undergo serious challenge since the 2011 presidential and legislative elections.

According to the official announcement from the National Elections Commission, Senator Kangar –Lawrence obtained 42% of the votes while Gbehzohngar Findley obtained 38%.

According to NEC reports, the ruling CDC had 15 male candidates for the 15 counties.

Another female candidate in Gbarpolu County, Botoe Kanneh, is leading the senatorial race in that county.