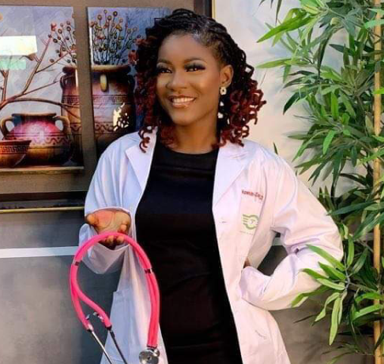 Madam Hawa Lamine Zahn, a 27-year-old lady, has been named dux of the A.M. Dogliotti Medical School, with a 3.26 grade point average (GPA). Mrs. Zahn is one of 13 female medical students who will graduate on March 21, 2022.

“It’s not about being the smartest,” she told Womenvoices, “It’s about being determined and willing to learn.”

Madam Zahn received her first degree in biology and chemistry from the University of Liberia when she was 22 years old, and she graduated from the College of West Africa (CWA) in 2011 when she was 17 years old.

On Saturday, March 5, 2022, the medical college administered the Hippocratic Oath to the 40 students who will graduate on March 21, 2022, as is customary.

In addition to administering the oath, the school presented Mrs. Zahn with eight (8) accolades, including the Dean’s Award. She also obtained honors in Physiology, Pharmacology Clinical Subject, Medicine, Surgery, Pre-clinical subject, and Obstetrics and Gynecology.

Despite the challenges of enrolling in, staying in, and graduating from medical school, the young medical doctor believes that women should seize the opportunity. According to her, they were 72 that enrolled at the school in 2016, but only 40 completed the program.

The young female medical doctor expressed her desire to specialize outside of Liberia. Hawa is currently working as an intern at a hospital in Monrovia.

According to observers, her story is worth elevating to the national discourse since, they said, it coincides with the celebration of International Women’s Day.

International Women’s Day is an annual event that takes place on every 8th day of March, as set aside by the United Nations for the world to reflect on women’s roles and contributions to humanity.