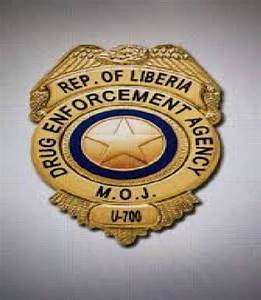 MONROVIA – The Liberia Drugs Enforcement Agency (LDEA) has arrested a huge consignment of narcotic substances in the tone of L$8,395,000 from several individuals across the country.

Following a hint, a 55-year old Nigerian identified as Joseph Nwajiaku was arrested with 23 tubes of heroin valued at L$3,220,000 by officers of the LDEA following his arrival at the Robert International Airport onboard Kenya Airway flight No. KQ 508(728) from Malawi to Monrovia on November 12, 2020.

Speaking to the Liberia News Agency (LINA) in an exclusive interview, the LDEA Clara Town Commander, Special Agent Emmanuel G Wonleh said, the suspect was discovered by the commander at the airport carrying a large quantity of substances in his belly, adding that after hours of persuasive interrogation suspect Joseph passed out 12 tubes of heroin at the airport.

He further said that when the suspect was later transferred to the headquarters of the LDEA in Fiamah, Sinkor, he passed out another 11 tubes of raw heroin which amounted to 23 tubes.

However, suspect Joseph has been investigated and charged with the unlicensed importation and illegal distribution of narcotic substances as contained in subchapter 14.101 of the amended October 17, 2014, panel code of Liberia.

According to Wonleh, several other suspects have been arrested in connection to the illegal possession and distribution of illegal substances across communities.

He indicated that after a search and seizure warrant issued by the Bushrod Island Magisterial Court on November 10-12, Six individuals were arrested from the Clara Town and Jamaica Road communities with 364.1grams of heroin and 70 plates of compressed marijuana worth at L$5,175,000.

“The arrest was made possible following a verified intelligence and experience of my team”, Wonleh emphasized.

In related development, the LDEA has begun a demolition exercise of criminal’s hideouts across the country ahead of the December 8 Special Senatorial Election (SSE).

According to the Operation Director Lorenzo P. W. Pelham, the exercise is intended to buttress the joint security’s effort in maintaining and stabilizing peace and security in the country as well as discouraging the existence of high code criminal concealment across the country.

He noted that the operation will cover the entire country as they have begun in Montserrado and will continue after the successful conduct of these elections.

Pelham called on and encouraged residents to collaborate with the LDEA in cleaning up their respective communities to make them narcotic substances free.