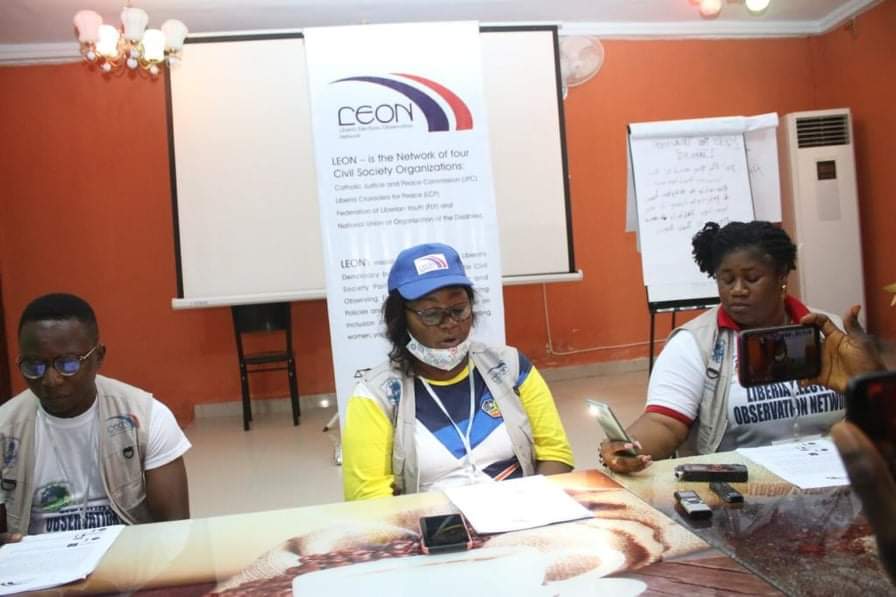 The LEON, a platform of four local civil society organizations including the JPC, LCP, FLY, and NUOD, in an opening of polls situation statement read by steering committee member Juli Endee by midday on Tuesday, reported that 68.7 percent of polling places opened on time, at the 8 AM prescribed time, as scheduled by NEC, but indicated that 31.3 percent of polling places did not open on time.

A statement later issued on Tuesday by the National Elections Commission validates the LEON’s report, as the NEC announced that voting in the four by-elections got underway under a peaceful atmosphere, with nearly all voting centers opening at 8:00 AM.

The group said as at 6 AM on voting day, it deployed 152 observers that include 128 short-term observers, 20 long-term observers, and four regional coordinators to observe the Tuesday by-elections.

In addition, LEON’s Steering Committee members were deployed to each of the districts where the by-elections were conducted, with all of its in-field staff being duly accredited by NEC and assigned to 140 polling places, representing 100% presence in all voting precincts and 51 coverage of all polling places in the four districts in Nimba, Grand Gedeh, Bomi and Bong respectively.

The LEON stated that its Tuesday statement provides a near real time assessment of NEC, on the opening of polls in the four districts, indicating that its observers note that of the polling places they covered, 97 percent had all polling materials available, while at three percent of polling places, some materials were missing, naming some of such materials as stamp pad, plastic seal, rubber bands, among others.

The group intimated that significant to the holding of free, fair and transparent elections, is the availability of materials for the conduct of elections.

As for the availability of ballot boxes for the four by-elections, LEON stated that a further important element of elections integrity is proof that the ballot box is not tempered with at the earliest moment of polling, reporting that 99.2 percent of its observers observed that the ballot box in the respective polling centers were shown to be empty before voting began.

However, the LEON disclosed that 0.8 percent of ballot box was not shown to be empty, stating that it is in the process of verifying this report and will subsequently release update on why and in which polling places this happened.

The election observatory group also acknowledged the presence of other elections observers, whose presence it states represents 56.1 percent of polling places covered, adding that these observers were drawn from the Muslim Council, the Mandingo National Caucus, Liberia Council of Churches, and the Elections Coordinating Committee.

The LEON emphasized that the presence of its observers will help in the appreciation of results from a larger sample of polling places which the group says is significant for integrity purposes.

Reporting on security presence for the Tuesday polls, LEON stated that NEC provides that at least two security personnel be present within the perimeters to each voting precinct, adding that given Liberia’s history, police in elections is important to ensuring order, the security of voting materials, and deterring would-be troublemakers – “In this case, LEON observed security coverage in voting precincts at 99.9 percent,” Madam Endee reported.

Madam Endee stated that the conduct of election has been negatively affected by the advent of COVID-19, and as a way of ensuring that the spread of the virus during the Tuesday by-elections was mitigated, several measures were put in place, indicating that LEON’s observers observed the compliance of these measures by both electoral officers and the voters.

“Observers found that 69.7 percent of polling places had hand-washing buckets, as COVID-19 mitigating measure, and 61.4 percent of voters were made to stand at least one meter apart,” she added.

The LEON announced that its findings as announced Tuesday, although provisional and partial, give good insight into what has happened during the conduct of the four by-elections, at more than 50 percent of polling places.

The LEON also highlighted what it called important achievement of NEC in several areas, encourage the Commission to ensure that polling places that had materials missing to be corrected.

“We note very few incidents of trucking, disruption of voting and campaigns around polling precincts, but we are still verifying [these] reports,” she noted.

Meanwhile the LEON is expected to on today provide its next update on the voting and counting processes of the 16 November by-elections.