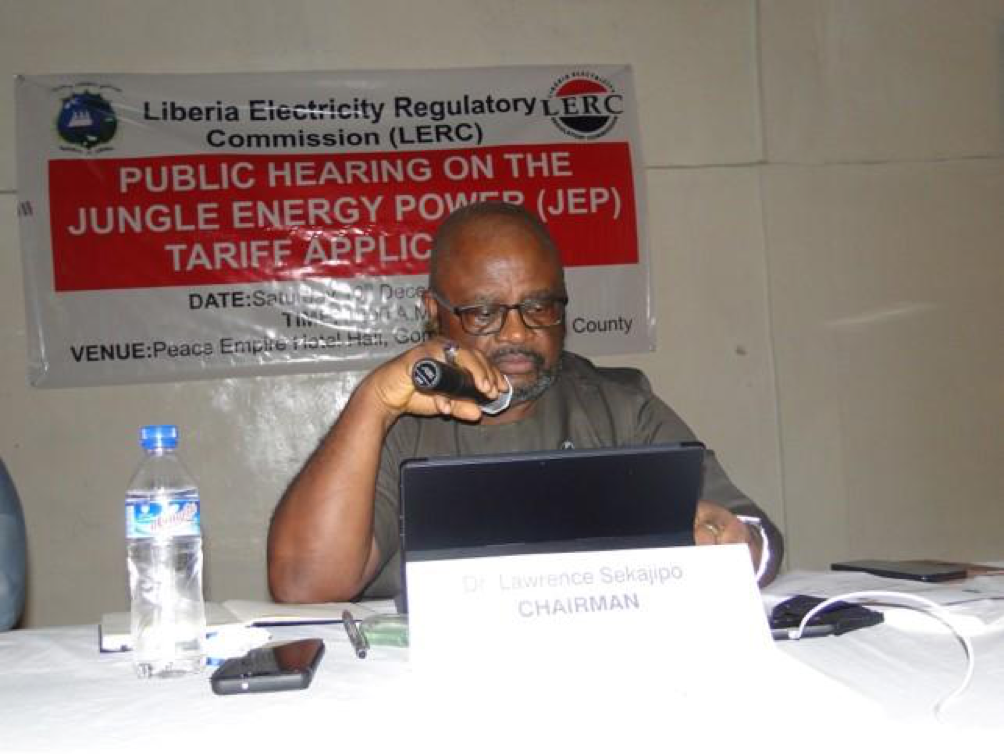 In keeping with the 2015 Electricity Law of Liberia (ELL) and the Electricity Tariff Regulations, the Board of Commissioners (BoC) of the Liberia Electricity Regulatory Commission (LERC) is currently reviewing Jungle Energy Power’s (JEP) electricity tariff application.

The review of the entity’s tariff application comes following a public hearing recently held in Gompa City, Nimba County, as the Commission, in April 2022, requested JEP to apply.

The public hearing was chaired by the Chairman of the BoC, Dr. Lawrence D. Sekajipo, and brought together the Ministry of Mines and Energy, local government authorities, stakeholders, the Liberia Electricity Corporation (LEC), JEP, businesses, civil society organizations, interest groups, and the public.

Chairman Sekajipo said the public hearing was to ensure that all affected parties have “a fair and meaningful opportunity for participation” in the decision-making process of the Commission.

He told participants at the hearing that, as required by the law and related regulations, the Commission’s decision in LEC’s application will be rendered in writing within the coming days after the hearing and will address all substantive comments raised or submitted to the Commission.

The Deputy Minister of Energy, George Gontor, lauded LERC for organizing the hearing and said parties should consider the affordability of electricity, which is in line with the government of Liberia’s pro-poor agenda.

In its tariff submission, the CEO and General Manager, Tomah Floyd, and Alieu Keita informed the Commission that JEP was proposing several end-user tariffs, and the proposed tariffs for electricity consumers in Nimba County will cover the period from February 2023 to December 2025 and will remain at the current costs of US$0.25 per kWh for residential and commercial customers and US$.215 per kWh for medium voltage users.

Mr. Kieta explained that JEP was proposing to the Commission to introduce “fixed charges of $ 2.00 for residential and commercial customers and $ 35 monthly for medium voltage users, and this amount will be used for Jungle’s expansion across the county.”

At the same time, JEP’s CEO, Tomah Floyd, informed the Commission that the Main Meter between LEC and CIE at Gbeunta, in the Ivory Coast, is not operational, and JEP continues to receive a huge variance between the monthly bills sent from CIE through LEC and the reading from the “check meter,” which is a serious financial loss.

“Instead of receiving primary voltage of 33 KV from Ivory Coast (CIE), the JEP transformers receive 31 KV, which decreases further as the MV line extends,” he lamented.

Mr. Tomah, for his part, informed the BOC that the lack of funding or subsidies to assist in the expansion of distribution lines into economically challenged communities in need of power is a challenge for the entity and requested assistance from national and local governments.

Customers expressed concern about how these debts were accumulated and the payment arrangement.”Every time I purchase electricity, an amount is deducted.” “I know how much I owe and do know how much I have paid to date,” Nyan Dolo pointed out.

In March 2013, a Power Purchase Agreement (PPA) was signed between the LEC and CIE for the supply of electric power to communities in Liberia from the Ivory Coast.

In 2016, JEP signed a Distribution Licensee Assignment Agreement (LEC) to operate the Nimba County segment of the Cross-border Electrification Project, and actual operations began in 2018.

The current electricity tariffs were agreed upon between LEC and JEP during the negotiation of the PPA in 2016.

The tariff consists of payments of US$ 0.01465 per kilowatt-hour billed by CIE for electricity supplied, LEC charges and fees of US$ 0.01/kWh on each unit sold, and the balance is set aside for JEP’s operating expenses.

The new approved electricity tariffs will go into effect in February 2023.

In 2021, JEP received a Large Micro Electricity Distribution License from the Commission to distribute electricity from CIE to communities in Nimba County.