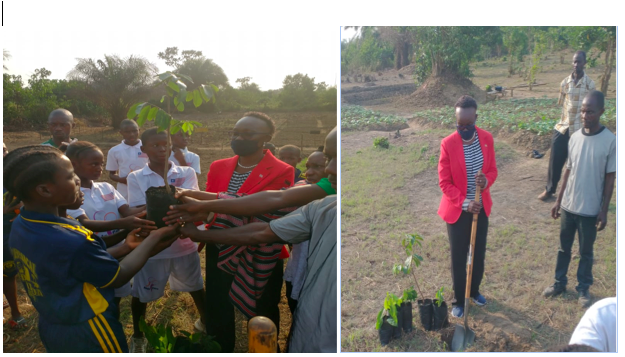 Ambassador Gurly Gibson-Schwarz, a Liberian female diplomat, has launched a one million tree planting project in Margibi County, Liberia, based on the recently concluded global Climate Change Summit in Glasgow, where world leaders such as President Weah, Prime Minister Boris Johnson, and President Biden issued a clarion call to action to save the planet, with everyone on board doing what they could.

On January 28, 2022, some students and residents from Margibi County’s administrative zone assisted the Liberian Ambassador in planting the first tree. “Seeing kids and community members excited to be a part of a climate change campaign was a wonderful experience,” she said.

“My inspiration came from the call to action to save the planet, with everyone doing his or her bit. A call to action was made during the Glasgow summit in the UK in November 2021 when world leaders, including our President, H.E. George Manneh Weah, Prime Minister Boris Johnson of the UK and President Joe Biden of the United States, gathered to find ways to tackle climate change”, the young female ambassador told Womenvoices over the weekend.

Ambassadors Gurly Gibson-Schwarz, one of the few seasoned female diplomats representing Liberia to the outside world, is the Country Envoy to the Court of St. James United Kingdom (UK), where she has ably served for the past four years since the Administration began. Her peers admire her intelligence, commitment, and patriotism.

The female Ambassador urged every Liberian to participate in the endeavor, warning that the earth is warming, floods are destroying livelihoods, and rising sea levels are causing coastal erosion and damaging homes.

“Liberians from all over the country are being encouraged to join the endeavor. The idea is to get the community involved in the effort to boost output. If we want to lessen the negative effects of climate change, each individual must play a role. To cool the earth, we need to develop more green places by planting more trees. Temperatures are rising; the planet is warming, floods are ruining livelihoods, and rising sea levels, which are causing coastal erosion, are demolishing homes. As a result, I’m inviting all Liberians to participate. Every Liberian should plant at least one tree,” She emphasized.

She explained that trees assist to cool the planet, produce oxygen, and remove carbon dioxide, underlining that the threes provide us with clean air to breathe and keep us healthy. “Plant a tree in your yard, in your neighborhood, at your school,” she encouraged us, assuring us that “together, we can preserve Liberia and the earth.” Let us do this for the sake of the next generation’s safety on the planet. “Unveiling that the quest to plant one million trees begins in 2022,” we must do our bit.

“Liberia is vulnerable to the impacts of climate variability and change, such as rising temperatures, increases in annual rainfall, and increases in the frequency of heavy rainfall events,” according to a report by the US Agency for International Development. These effects of climate change pose a threat to the country’s socioeconomic progress.

In a few months, the diplomat said, she would also organize a garden competition in Liberia, with cash prizes and/or a one-week trip to the United Kingdom to observe what is being done to combat climate change, so that the individual can learn best practices and bring them back to Liberia. She explained that this is her approach of raising worldwide awareness, motivation, and participation in the battle against climate change. Ambassador Gibson-Schwarz, who is currently in Liberia, also paid a courtesy call on her counterparts at the United Kingdom Embassy in Monrovia to discuss various options that could help Liberia.