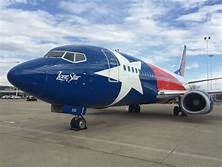 The Executive Mansion says President George Manneh Weah has achieved one of the things he had long desired to see in the country—the Republic of Liberia owning its own air carrier.

Having known that Liberia once owned what was then called “Liberia Airway” before the civil war, and feeling jealous seeing other smaller nations owning their own planes, the President had harbored the wish for the country to return to the sky with its red, white and blue colors.

Thus, in launching the country’s first postwar national carrier Friday, October 30, 2020, at the Roberts International Airport in Margibi County, the President could not hide his glee and joy.

“I am so delighted to be here today to witness this ceremony organized by the promoters of the new airline to be known and styled as Lone Star Air, Wings of Liberia, to operate as a national flag carrier for Liberia,” the Chief Executive said.

The President noted that the launch of Lone Star Air was consistent with his long-held wish, vision and clarion call for Liberia’s place in the international aviation industry; for fair-minded investors to take interest and explore investment opportunities in the sector.

President Weah recalled how he, on many occasions, promoted the need for investors to explore the aviation field and to engage into enterprises that create jobs and bolster the Liberian economy.

He specifically recalled that upon return from his first official visit to France, he encouraged investors to develop a new Liberian airline that will connect Liberia to the West African Sub-region and rest of the world.

“Recently, I was so happy when I was informed by authorities of the Ministry of Transport that potential investors from our sister country of Ghana had formed partnership with Liberian entrepreneurs and have applied to the aviation authority for permission to jointly develop a new airline for Liberia,” the Liberian Leader stated, thanking those who have undertaken the landmark initiative.

“It has been my dream, hope and vision that we will very soon see Lone Star Air, the Wings of Liberia, flying our flag in international skies, shining so brightly.”

President Weah maintained it is his strongest conviction that the launch of Lone Star Air is a timely initiative that should be commended and encouraged.

He disclosed he had instructed the Ministry of Transport and the Liberia Civil Aviation Authority to give necessary support to the venture within the frameworks of all applicable laws and regulations, both domestically and internationally, to ensure that there is no compromise with the safety of citizens who will utilize the proposed services.