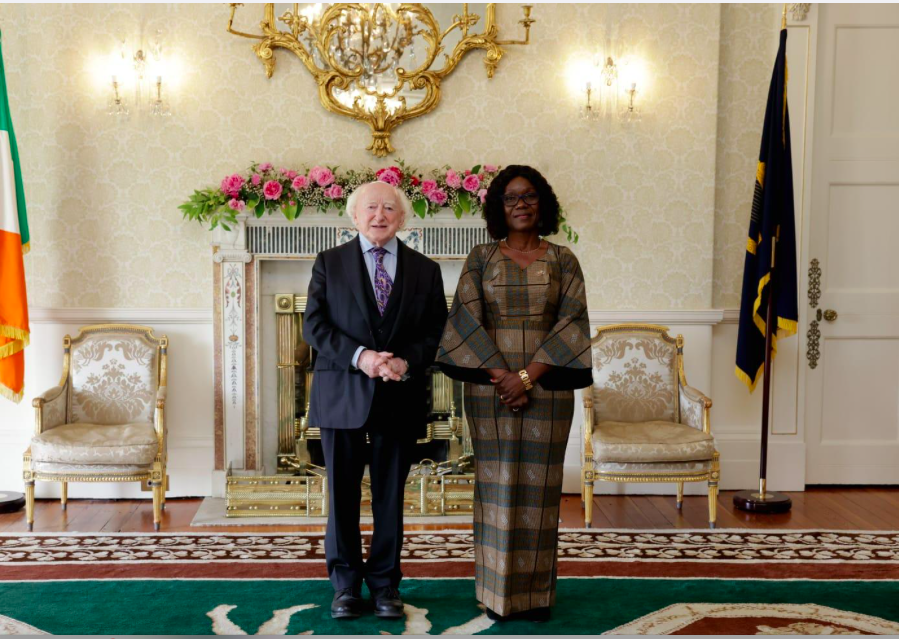 (London, July 17, 2022) Liberia and Ireland have rekindled their commitment to deepen bilateral cooperation, emphasizing trade and investment as well as driving democratic governance and human rights.

Speaking in Dublin, at Aras an Uachtarain where she presented her Letter of Credence to Irish President Michael Higgins at a colorful ceremony, H.E Gurly Gibson-Schwarz, Liberia’s Ambassador to London (also covering the Republic of Ireland), heralded the enduring partnership between the two countries as they forge new opportunities.

She conveyed the best wishes of the President of Liberia, H.E George Manneh Weah, towards advancing closer relations with the people of Ireland.

She hailed the strategic role of Irish contributions to global peace, highlighting the heroic service of the Irish contingent of the United Nations Peace Mission to Liberia (UNMIL) Liberia between 2003 and 2007. Liberia is also a recipient of Irish AID, impacting the areas of health and education, among others.

The top Liberian diplomat stated that Liberia’s push to increase trade and investment will result in shared prosperity between the two countries.

Ireland’s President, Michael Higgins, emphasized the importance of strengthening bilateral ties and the mutual benefits to both countries.

He applauded Liberia’s democratic transformation and the contributions of the Irish defense service men and women to consolidating peace.

He expressed optimism that the ceremony presented new grounds for greater cooperation.

Liberia received praise for its commitment towards climate change—especially the protection of the largest remaining rainforest in the West African sub-region.

Liberia was represented at the Africa Irish Africa Economic Forum held in Dublin last month. The event assembled government and trade representatives from Ireland and Africa.

The forum assessed and advanced strategies to promote innovation driven trade with Africa and Ireland- through the broader European trade bloc.

LMHRA, Stakeholders Brainstorm On Strategy To Build A WHO Pre-Qualified Quality...