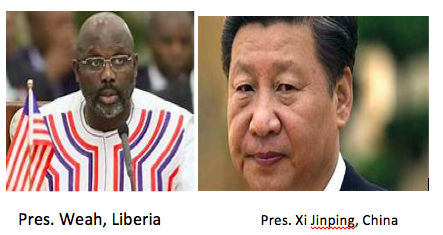 Management and Editorial Board of the Womenvoices Newspaper has apologized to its reading public, the governments of the Republic of Liberia and the People’s Republic of China for exaggerating and misquoting the Cross-Regional Joint Statement on the Human Rights Situation in Xinjiang in the Monday October 25, 2021 of Womenvoices Newspaper, under front page headline: “Liberia condemns China Over human rights abuses.”

Management says in the above referenced edition, which asserted that “Liberia is among a broad group of 43 countries at the United Nations that in a declaration, strongly condemned the Chinese government’s widespread human rights violations against Uyghurs and other Turkic Muslims in Xinjiang, China”, is exaggerated and misleading.

Management says it is aware of the strong bilateral relations between Liberia and China, and can in no way do anything to harm such a beneficial intercourse sub-exiting between the two countries. Management says it takes due note of the lapses that allowed said story to be published without going through due editorial scrutiny and would take appropriate action to remedy the situation.

Howbeit, Management said the joint statement read by France on behalf of 43 countries including Liberia expressed concern about the situation in the Xinjiang Uyghur Autonomous Region and urged China to ensure full respect for the rule of law and to comply with its obligations under national and international law with regard to the protection of human rights.

We are particularly concerned about the situation in the Xinjiang Uyghur Autonomous Region.

Credible-based reports indicate the existence of a large network of “political re-education” camps where over a million people have been arbitrarily detained. We have seen an increasing number of reports of widespread and systematic human rights violations, including reports documenting torture or cruel, inhuman and degrading treatment or punishment, forced sterilization, sexual and gender-based violence, and forced separation of children. There are severe restrictions on freedom of religion or belief and the freedoms of movement, association and expression as well as on Uyghur culture. Widespread surveillance disproportionately continues to target Uyghurs and members of other minorities.

We also share the concerns expressed by UN Special Procedures in their 29 March statement and the letter published by UN experts describing collective repression of religious and ethnic minorities.

We thus call on China to allow immediate, meaningful and unfettered access to Xinjiang for independent observers, including the UN High Commissioner for Human Rights and her Office, and relevant special procedure mandate holders, as well as to urgently implement CERD’s eight recommendations related to Xinjiang. We welcome the High Commissioner’s announcement to present her findings to date and encourage publication as soon as possible. In view of our concerns about the human rights situation in Xinjiang, we call on all countries to respect the principle of non-refoulement. We also call on China to ratify without delay the ICCPR.

We urge China to ensure full respect for the rule of law and to comply with its obligations under national and international law with regard to the protection of human rights.