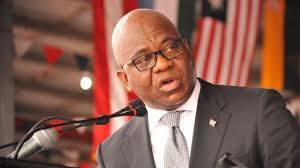 In Liberia’s democratic form of governance, the Constitution is the supreme and fundamental law of the country and its provisions are binding, have force, and effect on all authorities and persons throughout the Republic. What’s concerning is the institution, Justice Ministry, assigned the obligation to ensure truth, justice, and integrity is found in violation with an impunity-a case in point is the pickle of The Liberian Senate, Justice Ministry, and Samukai’s Senatorial win.

The recent midterm Senatorial election under the presidency of George Weah, held on the 8th of December, 2020, has revealed some fundamental issues of governance involving actors within the three branches of government over Lofa County Senator-elect Brownie J Samukai: the Justice Minister and Solicitor General’s communications to the National Elections Commissioners, and the Liberian Senate’s exercise of oversight into the matter.

In discussions concerning governance issues, the questions stand are; firstly, whether the Ministry of Justice or appointees have any color of authority to mandate the child of the constitution, the National Elections Commission, NEC “not to certificate” the winner of the Lofa county senatorial election or stop any of its constitutional functions?” Secondly, stemming from the action of the Ministry of Justice before the Liberian Senate, did he commit perjury, a felony of the third degree by any inconsistent statement or lying under oath on whether he knew or directed the Solicitor General of Liberia to write the National Elections Commission, NEC. The third issue is the Legislature, specifically the Senate, whether the Liberian Senate’s vote requesting Justice Minister and the Solicitor General to withdraw their communication to the National Elections Commission was a punishment for perjury??

The Solicitor General and Minister’s Letter to NEC

The concern of whether the Ministry of Justice or any of its appointees have any color of authority to interfere and stop the National Elections Commission from performing any of its constitutional functions? We say, February 18, 2021, and the March 1, 2021 communications from the Solicitor General, Cllr. Sayma Syrenius Cephus, and the Minister of Justice, Cllr. Musa Dean to the National Elections Commission directing that body not to proceed with the certification of Lofa County Senator-elect Brownie J. Samukai was improper and had no constitutional foundation, except an ego of attempting to interfere by interpreting and giving effect to the opinion of the Supreme Court on the workings of the NEC, an authority neither the president of Liberia nor any of his appointees has. Both communications from the Ministry of Justice citing section 50.12 of Liberia penal Law, we regret to say, that the statutory provision neither grants any right to the Ministry of Justice, rather acknowledged that the Court is the only body authorized to determine disqualification of a public official who commits a felony by misusing public money entrusted to him.

In the Solicitor General’s Letter, informing the Commission that the elected Senator for Lofa and others were convicted for the crime of theft of property and misuse of public funds in the amount of US1, $1447,658.35 (United State, One million one hundred forty-seven thousand Six Hundred fifty-eight dollars and thirty-five cent) is a factual decision from the Supreme Court opinion, to which the Court directed the Senator-elect Samukai and others to restitute within Six Months or go to jail for two-years. And on this issue, it’s clear that the Court did not anticipate any remedial action, like a prohibition intended to stop the Certification process of the Senator-elect Samukai. The letters from the Ministry of Justice under the signature of the Solicitor General suggesting that the ministry at any time can direct the National Elections Commissions to stop some of its cardinal constitutional responsibilities of holding elections, announcing results and certificating winners must not be continence in Liberia’s democracy, as it has no right whatsoever to stop any function of the National Elections Commission, a child of the Constitution which can only be reprimanded by the power of the Supreme Court, not a statutory creature, like the Ministry of Justice or any of its fins. This false notion, clearly not having bases in the constitution neither the statute must be condemned by all that desire good governance. If the stroke of the ministry’s pen is used to intimidate the body responsible to set the constitutional pace in Liberia by holding elections, the Ministry’s security and guns could be used to force the chairperson of the commission to announce a different result during the 2023 general elections.

On Brownie J. Samukai’s wrong’s action, this piece is categorical, and in no support of the manner and form the Senator-elect Brownie J. Samukai misused funds entrusted to him and the Unity Party-led government. Hence, restitution, as mandated by the Honorable Supreme Court is agreed. And further says that call for the constitutional process on certification to be respected in no way a suggestion that the Senator-elect, cannot be punished for act unrepresentative of a Senator.  Under a country of Laws, Brownie Samukai can be suspended, expelled, or removed by two-thirds votes of Senate members, if they deemed that Samukai’s action to misuse entrusted public funds is a cause of a crime not representative of a Senator.

Did The Minister of Justice Direct the Solicitor General to write NEC?

Certainly not! The Minister of Justice did not give any directive to the Solicitor General to communicate with the National Elections Commission to stop the Certification of Lofa County senator-elect Brownie Samukai. The letter that was written by the Solicitor General is self-explanatory which says, from the office of the Solicitor General and its closing paragraph states, “it is my considered opinion…you will therefore proceed not to certificate him.” Had the Minister directed the writing of the said communication, Cephus would have written phrases like, “by the directive,” “The considered opinion of the Minister, or ministry.” Hence, the communication speaks for itself that it was not directed by the Minister and it is very likely that the Minister’s cover-up for the solicitor general, he may very likely never said the truth under oath, perjury as the senators’ believed.

Ordering the Commission to stop the certification of an elected Senator is to prohibit the performance of the constitutional duty assigned to the commission. And the law on remedial or extraordinary writ says, “The power to issue any remedial action is limited to a Justice presiding in Chambers. Except as provided on a writ of habeas corpus and as may be otherwise provided by statutes, otherwise, the power to issue remedial or extraordinary writs in exercise or aid of the appellate jurisdiction of the Supreme Court and to otherwise issue writs of mandamus, prohibition, quo warranto, and other remedial or extraordinary writs and processes, reside exclusively in the Justice presiding in Chambers.” Section 2.9, title 17, Judiciary law of Liberia, 1972

SENATORS DECIDING PERJURY COMMITTED BY THE MINISTRY OF JUSTICE

Still on the Solicitor General’s letter to the Elections Commissions, and looking at LIBERIA DEMOCRACY: THE PICKLE OF THE LIBERIAN SENATE, JUSTICE MINISTRY, AND SAMUKAI’S SENATORIAL WIN, the saga caught the attention of Senators, legal minds and Members of the public, to which the Senate rightly used its oversight power and cited the writer, Solicitor General, Cllr. Cephus to appear and be accompanied by his boss, Justice Minister, Cllr. Musa Dean. Prior to Minister Dean’s accompanying the Solicitor General, his earlier appearance before that august body, the Senate, saw him denying that he ever give a directive or had any knowledge of the letter to the Commission. He added that he only saw the letter on social media. Contrary to his earlier statement even captured by the media, the minister contradicted himself when he accompanied the Solicitor General a few days later to the senate when he told senators that he agreed to have knowledge of the communication written by the Solicitor General. His second statement contradicting his earlier statement anger most of the Senators, who said, he lied under oath. Hence, the Senate decided the issue of perjury, by casting a vote requesting the Solicitor General and the Minister of Justice to withdraw the letter to the National Elections Commissions is not a punishment for perjury. The law on perjury section 12.30 of the New penal law of Liberia, states, “ A person has committed perjury, a third-degree felony, if, in official proceeding (a proceeding heard or which may be heard before any legislative, judicial, administrative or other governmental agency or official authorized…), he makes a false statement under oath or equivalent affirmation, or swears or affirms the truth of a false statement previously made, when the statement is material and he does not believe it to be true.”  The punishment for perjury in law includes a fine, probation, or imprisonment for a period decided by a hearing. The least punishment for the Minister expected would have been a fine and not a withdrawal of the letter.

Conclusively, Liberia as a country of Laws and not man, and thinking about LIBERIA DEMOCRACY: THE PICKLE OF THE LIBERIAN SENATE, JUSTICE MINISTRY AND SAMUKAI’S SENATORIAL WIN, it’s fair to settle that the philosophy of good governance does not accept a Minister of Justice, Solicitor General of Liberia or President to interfere, restrict or obstruct the workings of a National Elections Commission expected to be independent and impartial for free and fair elections. For the Liberian Senate’s hearing on the false notion of the Solicitor General and the Minister of Justice, it was appropriate and timely for a check and balance, except their decisions on perjury which did not conform to punishment as prescribed by law. Therefore, all Liberians must be aware that the constitution of Liberia says “power is inherent in the people. All free governments are instituted by their authority and for their benefit and they have the right to alter and reform the same when their safety and happiness so require.” In order to ensure a truly democratic government for Liberia that responds to the wishes of the people, the people have the right at such period, as was on December 8th, 2020, to have elected Mr. Brownie J. Samukai as Senator for Lofa and others for their respective counties. So, for the future of Liberia’s democracy to be respected by world leaders, everyone to include Members of the Legislature, Executive, and Judiciary must be respecters of the rule of law and ensure good governance for Liberia’s growth.