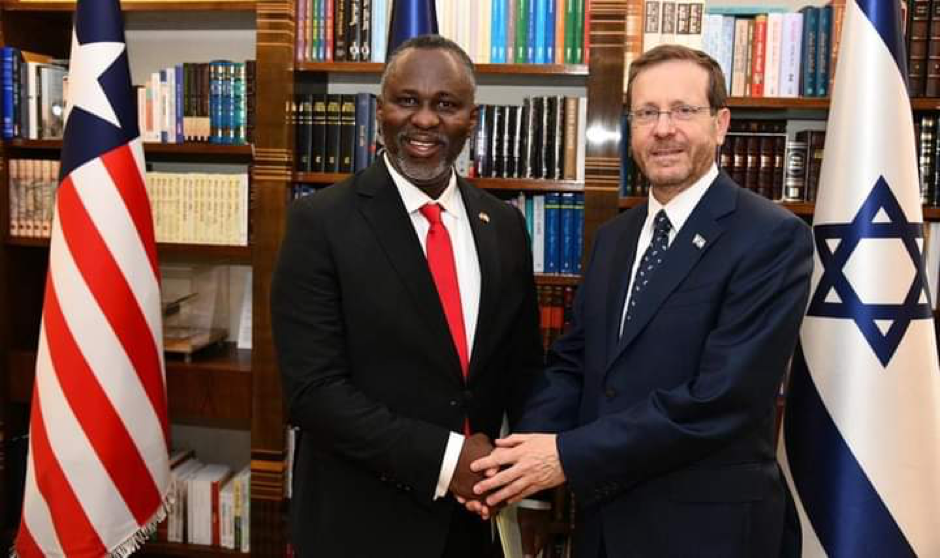 7 June 2022, Jerusalem: Israel’s President, His Excellency Isaac Herzog, has termed Israel’s relations with Liberia as “unique.” Both countries have had long-standing diplomatic ties, according to President Herzog, dating back to the establishment of the State of Israel.

According to a dispatch, he was speaking in Jerusalem on Monday, June 6, 2022, when he was greeted by a high-level Liberian government delegation led by Hon. Nathaniel F. McGill, Minister of State for Presidential Affairs, who delivered a special message on behalf of President George M. Weah to Israeli President and government.

“Israel has great regard for Liberia,” the Israeli leader remarked, adding that “this visit by President George Weah’s Minister of State and delegation is significant.”

He described Liberia as a “strategic partner in Africa” with whom Israel will endeavor to advance “our strategic alliance for the betterment of both countries.”

President Herzog told the delegation that Liberia has a huge potential for all kinds of Israeli investments. Trade and business, agriculture, education, health, and tourism are among the areas where both countries must work together for socioeconomic growth.

“We have all kinds of experience to support Liberia in its development push,” he said, adding that “the sooner we start our interactions, the better.” He also suggested that Israel should send “a large economic delegation to Liberia shortly.”

Hon. Nathaniel F. McGill, Liberia’s Minister of State for Presidential Affairs, had earlier conveyed President Weah’s request for the formation of a Trade Mission to Jerusalem, as well as the Liberian leader’s goodwill to Israel. He recalled the deep bonds that have existed between the two countries since 1947, when Liberia voted in favor of Israel’s formation at the United Nations.

“President Weah wishes to reestablish the historic relationships that have existed between our two countries for many years. That is why we have come to bring you a special message from him, which is included in this formal letter he has addressed to you and your government “Minister McGill stated the following.

He went on to say that establishing a commercial mission will pave the way for full diplomatic representation in Israel in the future.

He informed President Herzog about Liberia’s progress under President Weah’s leadership, explaining that despite the negative effects of the Ebola and Corona viruses on the Liberian economy, President Weah and his team have managed to maintain macroeconomic stability while keeping the country peaceful. Despite the withdrawal of the United Nations Peacekeeping Mission from Liberia, he claimed, this was made feasible.

“In Liberia, elections will be held in October, and we are dedicated to guaranteeing a peaceful democratic process,” said the Minister of State.

He then expressed gratitude to President Herzog for accepting the Liberian delegation and for their warm welcome since their arrival.