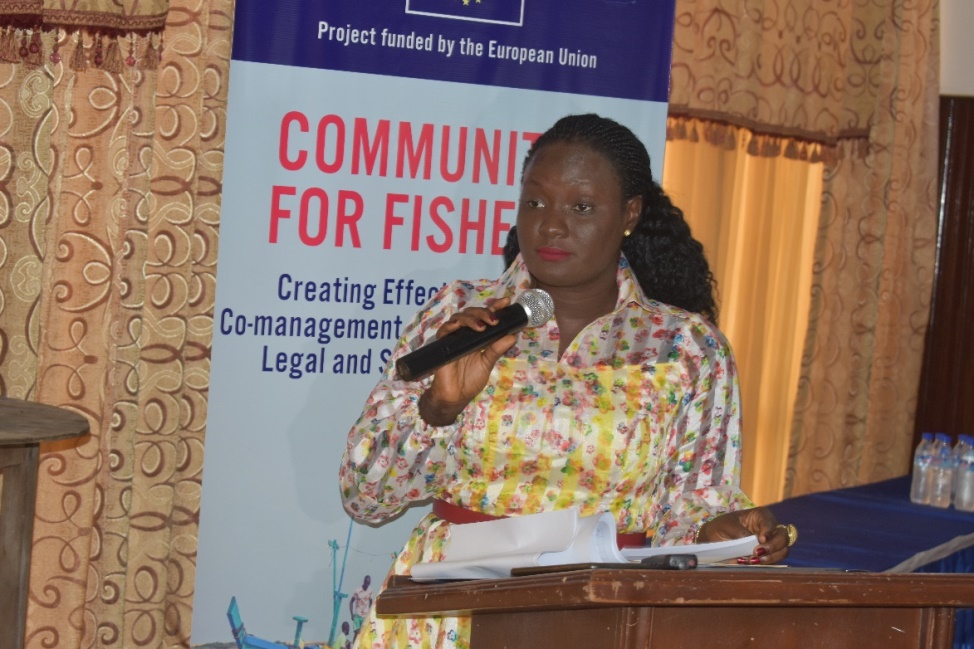 The Director General of the National Fisheries and Aquaculture Authority NaFAA, says the government of Liberia remains committed to sustainably managing the fisheries sector by employing the best fisheries management practices and ensuring a sustainable exploitation of the resources.

Speaking Friday December 11, 2020 during the official launch of the Environmental Justice Foundation EU sponsored Communities for Fisheries Project held at Monrovia City Hall, Mrs. Emma Metieh Glassco disclosed that government through NaFAA approach has been to involve the local communities which required organizing them into Collaborative Management Associations (CMAs).

Mrs. Glassco explained that the CMAs are local artisanal fishermen institutions partnering with NaFAA in ensuring the sustainable management of the fisheries sector and reducing IUU fishing.

The NaFAA Director General who acknowledged the support from donors to the sector, especially the European Union stressed that the level of support and partnership with donors (European Union, among others) in addressing the challenges facing the fisheries sector of Liberia is highly welcoming.

The Liberian Fisheries Expert noted that “the Communities for Fisheries Project is one project that demonstrates the interest of our partners and addresses one of the major challenges of our fisheries sector, the fight against IUU”.

She indicated that “this project willcreate effective community co-management associations to secure legal and sustainable fisheries in Liberia with three million funding support from the European Union, the project will run for four years, 2020-2023, and has begun a new era of partnership between NaFAA and EJF”

The NaFAA DG pointed out that the costal dwellers in Marshall (Margibi County), Robertsort (Grand Cape Mount County), Buchanan (Grand Bassa) and Grand Cess (Grand Kru) are expected to be direct beneficiaries of this program.

Disclosing further the impact of the project on the fishing communities, Madam Glassco stated that “this project will impact the lives of over 11,000 fisher folks using some 4,000 canoes which directly support around 56,000 people including small-scale fishers, fish processors and Mongers whose livelihoods depend on improved and productive fish catch”.

She assured that NaFAA will provide every technical support needed and will ensure its oversight of the Project and also NaFAA’s involvement will go beyond chairing the steering committee and will include monitoring project deliverables, ensuring project timelines are met and the impact of the project is felt by the local population.

At the same time, Mrs. Glassco noted that the project is expected to address Pillar Two of the Liberian Government Pro Poor Agenda for Prosperity and Development (PAPD) caption 3.4, section 3.4.1.6 which talks about improvement of fisheries in the country.

Meanwhile, the Executive Director of the Environmental Justice Foundation Steve Trent based in the United Kingdom disclosed that they are prepared to work with the government of Liberia through NaFAA for the overall development of the fisheries sector through communities’ involvement.

Mr. Trent said they are also prepared to ensure success in the fight against illegal, unreported and unregulated fishing in Liberia for the benefit of the local fishing communities.

Man, 39, chops up wife to death in Bong County