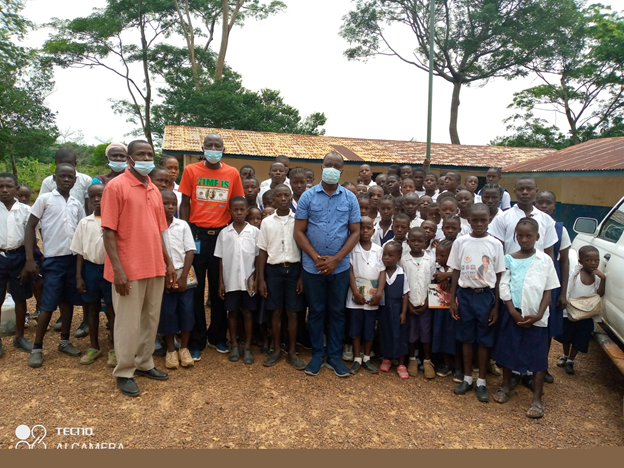 A Liberian journalist and citizen of  Nimba County,  Mr. Jonathan Paye-Layleh, has launched an operation he has codenamed: “Give Them a Future”, intended to encourage parents to get more involved in the running of schools, especially  in rural towns in the county in the face of serious national challenges and inadequacies to fully support those schools.

The journalist has just donated badly needed instructional materials including reams of paper, dusters, chalk and pens to schools in the Lao Chiefdom area in Menipea-Mah District, where he had an opportunity to interact with parents, teachers and students.

On every step of the tour, Mr. Paye-Layleh pleaded with parents not to sit supinely and leave the running of schools to government because, as he said in one town, “the children of the minister of education and other officials of government will never come to attend here. Only our children will. ”

He told parents to prioritize the education of their children by extending some hand of help to those schools in the face of government’s apparent inability to properly cater to the schools.

Most of the schools in the region were established through citizens’ initiatives during the civil war and they were later turned over to the government.  As a result, almost every town has a public school and government has not been able to fully attend to those schools.

In one town, Tunukpuyee, the acting principal, upon receiving the gesture, said the school was so terribly short of stationery and instructional materials that they were rationing a ream of sheets, giving only three sheets to each teacher to draw up exams.

“Operation Give Them a Future”, the journalist says, aims to get parents to appreciate the harsh reality of today and make keeping their children in school their top priority.

“If this is done, we will eventually have a society of highly educated people and this will  help address some of the perennial problems that have beset us as a county for a long time,” he told teachers and students in the town of Bainekpalalah.

He emphasized the need to get more girls to go to school saying the operation he has launched will in the future “take us into the jungles to get our young girls to come out to go to school. They belong in the classrooms.”

In the town of Gbellie, Mr. Paye-Layleh reminded mothers that “the only way we can create more of Ellen Johnson Sirleaf, and other outstanding Nimba County women like Edith Gongloe-Weh, Margaret Korkpor,Yah Boayou and Nohn Rebecca Kidau is to stand firm now and support our girls to go to and remain in school.”