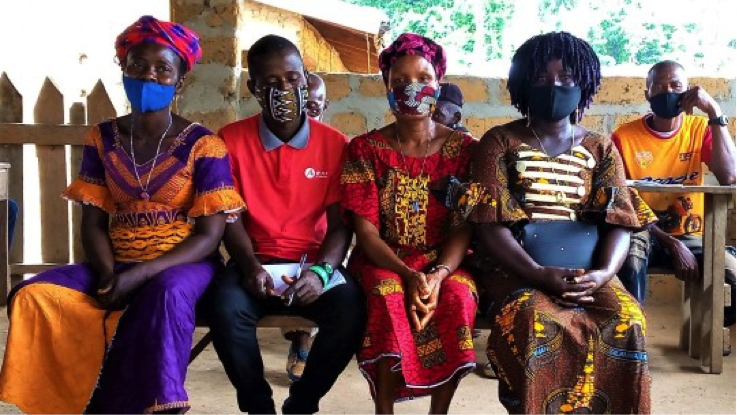 In Liberia, in May 2021, the Bluyema Clan’s most outspoken and politically active women gathered to agree who would run for election for the leadership positions of its Community Land Development and Management Committee – the body responsible for making decisions on land management and use.

Bluyema is nestled in thick forests along the Liberia-Guinea border where, like most tenure systems in Liberia, land rights are based on customary laws derived from local lineage-based governance systems.

But the lack of community-led land governance tools has left many rural communities – and women in particular – stripped of their rights to forests or viable agricultural land.

The 2018 Land Rights Act recognized customary land ownership and provided a legal mechanism for rural communities to secure land tenure. The act requires communities to include women and youth representatives as equal partners in local land governance structures, like the committee.

Despite these legal provisions, discriminatory gender norms prevent women from speaking about and participating in political matters in rural communities like Bluyema. Village leadership roles are almost always held by men.

These all-women gatherings to discuss leadership within the committee were facilitated by the Liberian land rights organization Sustainable Development Institute (SDI), in partnership with the USAID-funded Integrated Land and Resource Governance (ILRG) programme. The discussions are part of a broader strategy to increase the participation of women in community land governance.

In the run-up to the committee elections, SDI highlighted land experts and civil society leaders on ‘Radio Life’, a radio programme that was broadcast multiple times in communities in Lofa County where Bluyema is located. The programme provided general information about the customary land governance process and encouraged women to participate in land management bodies, such as the committee.

“More than anything, the radio show was aimed at men to support women in their quest to engage with the land documentation process,” explains Nora Bowier, SDI coordinator.

The talk show also provided a conduit to reach communities that are not currently involved with customary land documentation and show them that adjacent communities like Bluyema are taking advantage of documentation to secure the future of their land.

In the week prior to committee elections in Bluyema, Bowier and other SDI coordinators led gender-focused discussions with approximately 30 women. Discussions focused on women’s land rights, women’s participation in land and natural resource management and strategies to effectively work with male counterparts.

The women discussed and decided who should run for the committee’s leadership roles, while also developing community outreach and campaign strategies. Bowier also worked with each candidate on a one-on-one basis, providing the women with a safe space for open discussions about their concerns and needs.

Just a day before the election, Gbelee Sumo – who decided to run for the position of chairperson after the all-women gatherings – gave a memorable campaign speech to the community, calling for women to stand up and support each other.

“She stood up to build the confidence of the community,” Bowier recalls. “Gbelee is eager to lead and to represent the voices of women who have been marginalized for generations. She made it clear there is a space where women will sit at the same table with their male counterparts.”

In June 2021, four women were elected to both the vice-chairperson and treasurer leadership positions in the committees throughout Lofa County. Gbelee Sumo, the leader from Bluyema, became Liberia’s first committee chairperson. “The project is helping to open the eyes of women who have been placed at the margin of society in terms of decision-making and participation in local government,” says chairperson Sumo.

Over the past 18 months, USAID partner SDI reached over 300 women from more than 30 rural communities across Liberia. As a result, 60 women are now elected committee officers in three counties, representing just under 50% of the available leadership positions.

Continued efforts are needed to engage men as supporters of women’s leadership, ensure that women’s participation is truly meaningful, and avoid risks of backlash and gender-based violence for these new women leaders.

The women-only sessions give women a space where they can freely interact without an elder male or chief dictating or suppressing their views and intimidating them. USAID and the Liberian Land Authority are helping to bring new dynamics to customary land governance – Nora Bowier, SDI coordinator.

Communities like Bluyema, that have successfully created by-laws and community land governance committees that meet the Land Rights Act’s requirements for women’s participation, can now continue with the land documentation process outlined by Liberia’s Land Authority in a more representative and inclusive way.

When land management committees represent a wider cross-section of the community, they can significantly improve land and natural resource management. Women often know more about boundary lines, because they are the ones engaged in agroforestry activities such as growing food and collecting firewood.

In addition, rural communities rely on logging as their principal means of income, and with an inclusive governance body where women play a key role, logging revenue is more likely to benefit the entire community and not just one person or one family.

“Corruption is being reduced. We have already seen some examples where communities are putting a halt to land grabbing,” says Bowier. “It is now more difficult for a chief to single-handedly come up with a contract between himself and a logging concession.”

USAID has worked to strengthen inclusive land governance in Liberia for more than a decade. A recent impact evaluation of USAID-led customary land interventions shows that this type of governance is novel for many communities, and behavior change does not happen overnight.

Searching for the forgotten heroes of World War Two

Liberian journalist launches operation “Give Them a Future”