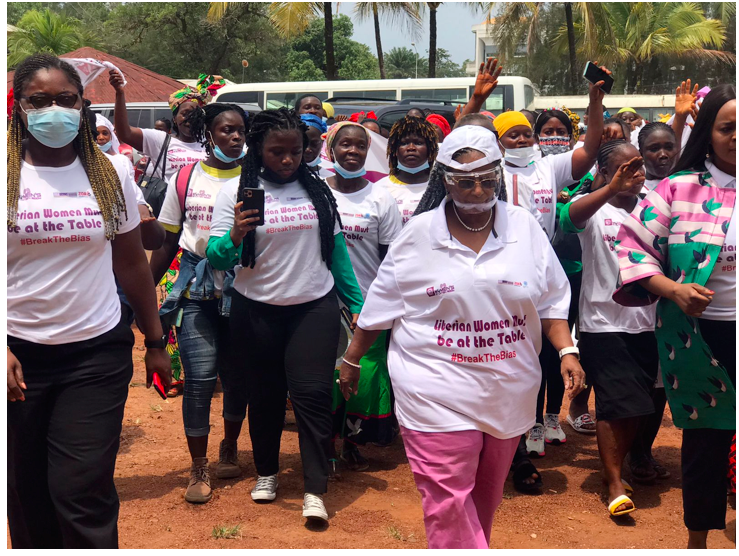 Cllr. Yvette Chesson Wureh, the ABIC’s Establishment Coordinator, spoke during the event, emphasizing the importance of Liberian women being present at the table, not only at the table, but also visible.

The forum brought together women from all backgrounds to share their stories and discuss the obstacles they face.

Cllr. Wureh told the women that they have a right to be at the table and that they are equal partners with the men, while also urging them to continue their education.

Teach your children equally because they are equal. We are losing our girls because we are teaching them to be quiet. ” I don’t want us to be quiet. Women are thinkers, and we have the ability to do things. Our girls’ voices must be heard, whether they are good, bad, or ugly. That is why we, as parents, will need to train them to be heroes and formulate ideas so that they will be able to speak out. We are not teaching our girls to speak out. That is why when they are raped they cannot talk because their parents always tell them to shut up, so even when they are raped they cannot talk, “Cllr. Wureh asserts.”

Further, the ABIC Establishment Coordinator urged women not to join political parties solely to cook for men, but rather to join because they believe in the party’s ideas and believe that people should be able to listen to them.As such, they must make their way to the table.

She told the women in political parties to step up and stop serving food and drinks to the men, but rather give ideas and make their way even if the men aren’t giving them the chance.

You get on the front page and don’t settle for anything else. You are a woman and will be at the table. You will express yourself and you will be on the executive council. Women in political parties are aggressive, disruptors, and creators. They create that space. Don’t wait for it to come to you; you make it. Be brave, courageous, and burst through the berrels and we will support you, “she said.

Cllr. Wureh maintained that this is the time for women to step forward and take their space and should not let the men stop them.

In conclusion, she disclosed that the reason they organized the forum was because they wanted to know what challenges were stopping women from going forward and being visible, emphasizing that since they are in the real world, they should understand the problems and attacks from their male counterparts.

Cllr. Olubanke King-Akerele, the Chairman of the ABIC Board, also spoke, saying that the issue of women dealing with drugs in the community is serious and has to be addressed.

Women, according to Madam King, are the future, and the subject of drugs is all over the place.

According to accounts, she was recently on the radio, emphasizing the importance of doing something concrete about the drug problem rather than just talking about it.

She stated that there are too many huge hands involved in narcotics, but hearing that ladies are using these medications is quite concerning.

“If you all are experiencing this in your community or with your child or children, let us do something about it. Let us decide on a concrete and specific thing from this IWD, and one of them is what we are talking about. Let us effectively be at the table so that one year from now we can show that we are at the table. The second thing is that we have got to do something about this drug issue. If we find women in our communities involved with drugs, we have got to take some concrete action because this thing is serious and our children are getting involved in it as well, and they are the future of the nation,” he said.

“I want to commend all of you, so please let us pledge. Don’t only see being at the table, but you got to do something about this drug business, which is serious,” she noted.

For her part, the first female chairlady for the Liberty Party Women’s Congress and also the first District Commissioner of Wanhasa District in Lofa County, Madam Julia F. Russell, told the forum that there are a lot of challenges she faces in the district.

Commissioner Russell noted that from where she is going from, for their children to go to school and graduate is hard.

A girl has five children, and she carries them on the bus to the farm because there is no daycare to send them there to learn. Most children begin going to school at the age of 16 years. We don’t have daycare like in Monrovia, where you have to be at a certain age before going to school, and if a woman goes to school at that time and her mother does not, they will need a lover to brush their mother’s farm before they can get to the sixth or seventh grade. Then they have one child, and the highest grade they reach is 9, and they will drop from school, “she said.

She further mentioned that the women in Liberia are killing themselves because they are also involved with selling drugs in their various communities because of money.

She urged her other women to wake up and stop selling drugs in the community, as well as residents to rise up and take action to address the problem.

Fear, according to Madam Elizabeth Lakay of the People Unification Party, is one of the factors preventing them from sitting at the table. They believe that the first thing that happens when they enter politics is that their male counterparts refer to them as prostitutes, disgraced women, and a variety of other derogatory terms, so they get fearful and retreat to the back.

Madam Lakay said that when you see yourself in a political group, men have what is called the “lion nature.” That is, they always want you to be at the back and not to be heard, or express yourself and shine.

But women, I want us to love one another. I asked my bossman what our problem was the other day.I had a women’s program at the Voice of Firestone and I ran that program for eight years, and in my own observation, I found out that women were very hard to call and give their input on the show. That program was called “Issue with Women,” and I said to myself, “Why is it that women are not calling?” Do you sometimes call on women’s talk shows and feel that maybe I will say the wrong things and people will laugh at me? So, today you see, all of us are expressing ourselves here. Let us promote one another, “she said.

Meanwhile, the ladies thanked ABIC for continuing to advocate for them in their local areas, claiming that, because to ABIC’s training, they are now able to run for public office in their district and defend their rights.

According to them, ABIC has done a lot for them, and as a result, they now understand their rights and are unable to allow males to exploit them as they once did.

Education, money, a lack of support from their fellow women, fear, and other factors are all preventing them from progressing.

The discussion was interactive, and the women were able to raise issues that were preventing them from taking a seat at the table. Fear was given a name.

The ladies used the medium to beg for ABIC’s help in carrying out their duties and not only sitting back, but sitting at the table and making decisions.

ABIC, on the other hand, stated that it would work with the women in their various areas to ensure that their opinions were heard. ABIC was especially interested in hearing about women’s difficulties, as they believe they can learn a lot from them.