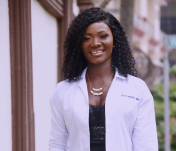 MONROVIA – A young Liberia female, Ms. Yei P. Wiah has emerged as Valedictorian for the 2019/2020 graduating class of the A.M. Dogliotti College of Medicine and Health and Life Sciences at The University of Liberia.

Several Liberians including that the local community organization, Liberia White Coat Chronicles (LWCC), which says it has highlighted Yei’s medical and academic journey before.

The LWCC wrote on its official Facebook page, that as a reminder, the world needed to know that the young brilliant Liberian doctor, Ms. Yei achieved this distinction through perseverance and self-motivation.

“It is important to also note that Dr. Wiah obtained six (6) different academic awards,” the LWCC added in its Facebook post, saying it was proud of Yei’s academic achievement.

“Congratulations on your well-deserved achievement Miss Valedictorian of A.M. Doglitie College of Medicine class of 2020., congratulations Dr! Another Liberian wrote on Facebook, in appreciation of Dr. Yei’s achievement.