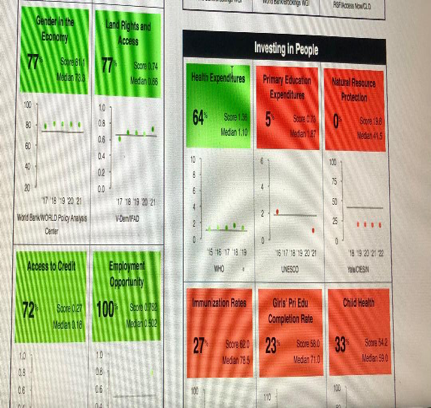 Following the dissemination of the MCC Fiscal Year 2023 scorecard over the course of the weekend, the United States Embassy made the announcement.

The Millennium Challenge Corporation (MCC) uses a variety of policy indicators to evaluate countries and determine which ones are eligible for its various assistance programs. These indicators are compiled on the MCC scorecard.

Additionally, the United States Embassy says it extends its congratulations to Liberia on passing the MCC Scorecard for the Fiscal Year 2023 for the first time since President Weah’s Administration.

According to the United States Mission in Liberia, if Liberia improves its performance on the indicators of the scorecard titled “Investing in People,” it will make the country more competitive for a second compact.

According to the U.S. Mission, Liberia is one of 66 countries that will undergo additional evaluation by the MCC Board the following month in order to determine whether or not they are eligible for the compact.

Although the scorecard indicators are subject to change for a variety of technical reasons, including the manner in which the data are calculated and collected, the United States Mission noted that Liberia has made significant headway in a number of areas, most notably in its efforts to bring inflation under control.

It should be recalled that Liberia did not do well on the MCC FY2018 Scorecard in a variety of categories, including the control of corruption, democratic rights, rule of law, political rights, and other similar categories. On the other hand, the MCC FY23 Scorecard showed that Liberia was successful in passing more than fifty percent of the scorecard’s categories.

According to the MCC FY2023 Scorecard, Liberia received a score of 12 out of a possible 20 points.

Gender Equality in the Economy, Access to Credit, Employment Opportunities, Political Rights, Civil Liberties, Freedom of Information, Health Expenditures, Trade Policy, Land Rights and Access, Control of Corruption, and the Rule of Law are the 12 Indicators That the Government Passed.

On the other hand, the government failed miserably in all of the same categories as it did in FY2022, including the percentage of young women who finish primary school, the health of children, the amount of money spent on primary education, the safeguarding of natural resources, the efficiency of the government, the direction of fiscal policy, and vaccination rates.

In the meantime, a number of Liberians have expressed their gratitude to the government for the few points that were awarded to Liberia on the scorecard.

Charles Fernandez Kellen emphasized in a comment that the movement of Liberia to a higher position on the MCC Scorecard is not a significant milestone.

In an interview that was conducted exclusively for this publication, Patrick Gaye expressed gratitude to the government for the incremental improvements made in a number of the Scorecard categories.

Gaye made use of this platform to encourage the GOL to invest in its people, particularly the younger generation, and to stress that it was high time that the government put the welfare of the people as its top priority.

Because of the requirement that a country can only be eligible for MCC funding if it satisfies 10 of the 20 indicators, most of which fall into the more challenging categories, Liberia may or may not be eligible for the funding.

The Board of Directors of MCC makes use of the indicators in order to evaluate how well countries perform in relation to MCC’s eligibility criteria. A nation is considered to have “met” the requirements of an indicator if it achieves a score that is equal to or higher than the absolute threshold.

The Millennium Challenge Corporation (MCC) is a United States Foreign Aid program that was established in 2004 and gives grants and assistance on a temporary basis to nations that meet stringent criteria for good governance, the fight against corruption, and the respect for democratic rights. Scorecards are an essential component of the organization’s competitive selection process, which is used to ascertain which nations are qualified to negotiate a compact, which is a grant agreement lasting for five years.

Scorecards are compilations of independent, third-party indicators that measure the effectiveness of a nation’s policies in the areas of economic freedom, ruling fairly, and investing in its people. There are twenty indicators in each scorecard.