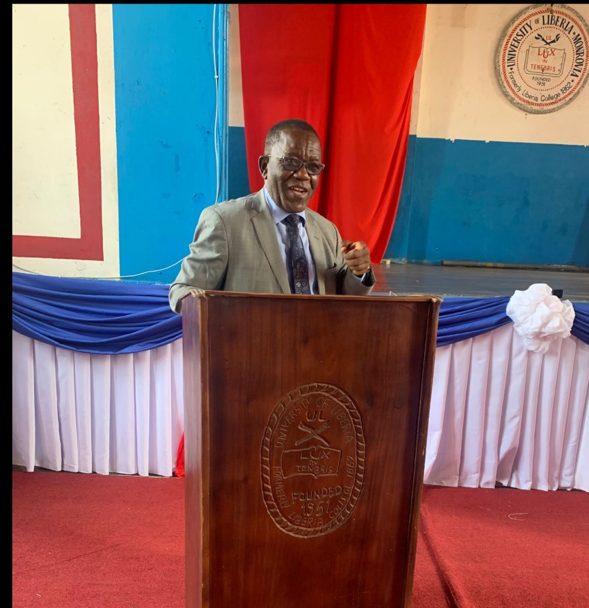 The Executive Director of the Environmental Protection Agency of Liberia (EPA), Prof. Wilson K. Tarpeh, has told a gathering in Monrovia that as of late, Liberia’s coastal and marine environments are experiencing rapid deterioration due to increased population pressure and illegal economic activities.

Speaking at the start of a week-long training on “Fisheries Management and Integrated Coastal Zone Management”, Prof. Tarpeh said that the impacts of climate change will especially affect climate-sensitive sectors such as agriculture, health, fisheries, coastal resources and many others, thereby significantly giving rise to food insecurity, increase in water vector-borne diseases, decline in fish stock and the flooding of coastal cities and communities.

The training is organized by the EPA and the Africa Centre of Excellence in Coastal Resilience Project (ACECoR) of the Centre for Coastal Management (CCM) with funding from the World Bank and the University of Cape Coast.

The training was made possible through an invitation extended by Prof. Tarpeh to the University of Cape Coast Africa Centre of Excellence in Coastal Resilience Project of the Centre for Coastal Management.

It is intended to assist in building the capacity of relevant ministries, agencies, academic institutions, and national experts involved in training, researching, managing, and protecting the marine ecosystem and coastal resources of the country.

Speaking further, Prof. Tarpeh said climate change impacts have the potential to negatively affect the human development of any country and make it impossible to attain the Sustainable Development Goals.

He explained that despite the impacts of climate change and human pressure on the fisheries and coastal sectors, the EPA continues to undertake vulnerability and adaptation assessments to determine the level of impacts and identify appropriate adaptation actions to be undertaken to ensure the resilience of these sectors.

In the case of the fishing sector, the National Fisheries and Aquaculture Authority continues to exert all efforts to ensure sustainable fishing management by distributing appropriate fishing nets and also monitoring small-scale and big trawlers, Tarpeh noted.

He disclosed that at the EPA, adaptation actions continue to be at the forefront of our agenda to combat the increasing wave of coastal erosion in and outside of Monrovia.

The EPA Boss noted that the recent inception workshop of the Monrovia Metropolitan Climate Resilience Project is important to commence work to save the township of Westpoint within the city of Monrovia from coastal erosion, while the approval of the Greenville, Sinoe County Coastal Project is another action intended to protect the shoreline of Liberia.

“The Blue Ocean Project is also another project that is intended to address a clean and safe marine habitat in some coastal cities, support sustainable fisheries management, and address the livelihood of some of our fishing communities,” Prof. explained.

According to him, the training is important because Liberia as a country has nine of its fifteen counties as coastal counties and is heavily impacted by the adverse effects of climate change.

On the other hand, the importance EPA attaches to this training is not only limited to the utilization of traditional ocean industries such as fisheries, including marine fishing, marine aquaculture, marine fish processing, and tourism, along with its management, but also creates an understanding and appetite for young people to think about getting involved in research as well as the sustainable use of ocean resources for economic growth.

He indicated that at the EPA, partnership is very key to us as the lead government institution that is charged with the exclusive authority to supervise the affairs of the environment, of course, with sectoral collaboration.

“We hope to make concrete already existing conversations with the Africa Centre of Excellence in Coastal Resilience Project of the Centre for Coastal Management at the University of Cape Coast that will lead to the long-term capacity enhancement of Liberians through scholarship opportunities as well as having a degree-granting program here at the University of Liberia,” he concluded.

Also speaking, Prof. Denis W. Aheto of the Centre for Coastal Management said the center was established in 2013 because the University of Cape Coast is a seafront university, which provides a platform that exposes students and researchers to issues of degraded coastal environment.

Prof. Aheto disclosed that in 2019, the center was alleviated to the status of regional center of excellence by the Government of Ghana and Association of African Universities to address issues of degrading coastal and marine environments in West and Central Africa.

According to him, they are in Liberia in order to advance the vision of center, which is to establish or contribute to the development of platforms that can sustain capacity building in various areas including blue economic governance, disaster management, climate change mitigation and adaptation and coastal and marine biodiversity.

He further explained that they are in the country to support a short term professional capacity development.

“My mission is to improve women’s lives…” Says First Lady