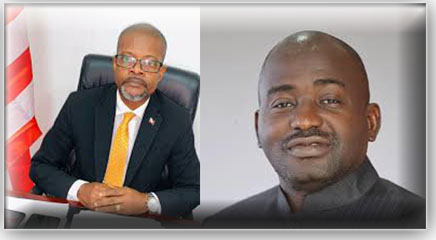 For the past few weeks, since the Liberty Party (LP) national convention, the brand of its new chairman, Mr. Musa Billity, has been in the media. Liberia is still bleeding from not only the recent senseless civil war launched by Ellen Johnson Sirleaf and Charles Taylor, but also from the rampant corruption of the Ellen Johnson Sirleaf Government of which Musa Bility was a major player.

At the onset, Liberians and the international community were made to believe that the almighty corruption was common enemy #1 of the Liberian people.  But the new president, following the 2005 elections, who was called “Iron Lady” admonished her constituents to desist from calling her “Iron Lady” once she became President, indicating a different intention.  Asking Liberians and the international community to drop her name “Iron Lady” after the election signaled a bad attitude to come. And it did not take long to see ominous signs when the likes of Musa Bility and others became her confidantes, meaning that she was not all-set to fight corruption head-on.

We are aware that as usual, opinions are wide apart, between those who support Bility and those who see his appointment/election as a scar on the Liberty Party, yea CPP.  But, let’s look at the resume of the LP leader who is being defender by Senator Dillon who is called “The Light”: In 2001, Dr. Sawyer was forced to flee Taylor’s Liberia, while Musa Bility found himself running the oil import and built himself up. Musa Billity who once served as ULIMO messenger to Interim Government, subsequently sprung on the national political scene in 2005 with his support to Ellen Johnson Sirleaf. He launched his radio/TV station and printed election materials (T-shirts, badges, etc.) to ensure the election of the former Iron Lady.  After Sirleaf was elected, Bility was given several high-level responsibilities, while he conducted his oil/cement business.

The cement and oil businesses were lucrative, but Musa Bility wanted more money. He became involved in tax evasion. A Liberian Court ordered him to pay 200,000 USD to the consolidated account of the Government of Liberia, but because he and Madam Sirleaf were involved in this in which GAC Auditor Philip Massaquoi testified as an expert witness before Judge Morgan, has no happy ending for the tax payors of Liberia.  Tax evasion was also plentiful in his oil business, and that too was buried by Madam Sirleaf and Bility.

He was chair of the LCA – (Aviation), if you can remember the Ellen Cochran-Gate, but due to his connection with Madam Sirleaf, he was never indicted.  To be fair to Musa, there several others who were reportedly involved: Eugene Nagbe, Brownie Samukai, etc., who were involved in the scheme, but due to their proximity to power, madam Sirleaf opted not to indict them. There is a plethora of tax evasion and malpractices, including but not limited to the Nimba land issue, FIFA, and other spates of corrupt behaviors that Musa Bility was involved in, but these were buried by Madam Sirleaf because she was a partner of Musa Bility and she was not interested in any accountability issue.

Besides, he was elected as the LFA president and represented Liberia on FIFA.  FIFA banned him after the indictment, charging him of stealing Ebola money and other funds sent by the world football body. This is what many Liberians remember due to the “recency effect.”

Musa Bility was accused of financial malversation in every position he occupied. For the airport, he was accused of embezzlement in complicity with Ellen Cochran. The Nimba land issue turned into a fiasco. It was Bility’s oil issue that was used by the Senate to indict and remove Kabineh Ja’neh from the Supreme Court.

This new chairman of LP is as tainted as the former LP Chair, Rep. Fonati Koffa, who was arrested and sentenced for embezzling client’s money in the US, while he was a lawyer and town official. After being disbarred, Koffa flew home to re-invent himself. He was put in charge of investigating government officials accused by Global Witness of accepting bribes, an entity supported by Sirleaf and George Soros. He would be given a million dollars budget. A thief investigating thieves! Only Ellen could do such. As we always say, “steal from steal made God laugh”! Mr. Koffa went to his village and bought himself the position in the House of Representatives. Mr. Koffa has now become deputy speaker of the House.

Are these the best faces that the Liberian legislature and the LP can put forward? Since the end of the war, Liberia had been struggling with issues about accountability and responsibility. Naming people who cannot stand the basic test of honorability at the head of the institution of public interest does not augur well for good governance. People who have betrayed the public trust must not be given positions of prominence in society. It has an impact on our institutions and the psyche of future leaders of Liberia.

Just as President Weah is making a mockery of the fight against corruption by maintaining in position a person who stole citizenship at the head of the anti-corruption commission, those who put Bility and Koffa in a leadership position are telling young Liberians that integrity, honesty, and accountability do not matter in Liberia.

Some may say that we have accommodated people who committed the most heinous crimes, so why not people who stole a few dollars?  Someday, both two gentlemen will be called to represent their institutions at some international gathering. Hear the whisper after people have Googled them! Liberty Party and Liberia, when will you learn? But then, again, this is Liberia, where criminals get the front seat!

Meanwhile, as we pen this article, former Ellen’s confidante Brownie Samukai is reportedly arrested for embezzling/misappropriating the money allotted for ex-soldiers. The former minister was so corrupt to the extent that he established a bank account to which he Samukai and his appointees were signatories. Why was the retirees’ money not given to the National Social Security Agency of Liberia? But then again, one of his other bigger “mistakes” was not following President Sirleaf to CDC. He is apparently in a bigger trouble today because of that. The million dollars question is that, had Samukai followed Ellen to CDC, would he be “guilty” today. The answer is a resounding NO.