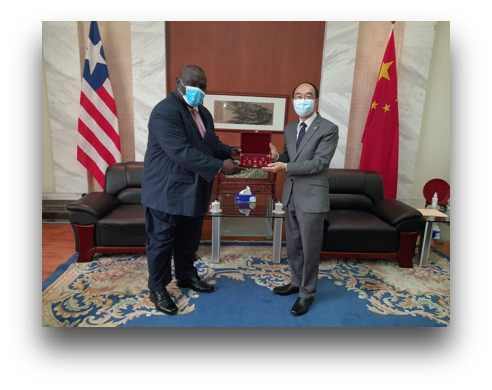 The Liberian National Bar Association (LNBA) and the People’s Republic of China have expressed commitment and willingness to collaborate in order to enhance Liberia’s rule of law reform program and support the fight against corruption and capacity building. This comes at the same time that Liberia is making strides to improve its democratic credential. The People’s Republic of China’s Embassy is located near Monrovia.

During a meeting on November 30, 2022, the Chinese ambassador accredited to Liberia, Amb. Ren Yisheng, and the President of the Liberia National Bar Association, Cllr. Sylvester D. Rennie, expressed commitment to work together to strengthen Liberia’s rule of law program. The Liberia National Bar Association made the announcement to the media on Thursday, December 6, 2022.

A meeting was held by the Chinese Ambassador at the Chinese Embassy in Congo Town, and during that meeting, the two parties reached an agreement to work together in a number of different areas. These areas include enhanced and more robust capacity building, reform of the rule of law sector, support in the fight against corruption, and exchange programs between the All China Lawyers Association (ACLA) and the Liberia National Bar Association (LNBA).

The Chinese diplomat asserted that in order to construct a more robust system based on the rule of law, it is necessary to realize complete scientific and unified legal norms, fair and efficient authoritative law enforcement, and a just justice system.

Cllr. Sylvester D. Rennie, President of the LNBA, provided a response to the Chinese Ambassador and commended the People’s Republic of China through its Embassy in Monrovia for its partnership with and support of the institution.

As progressive partners, the LNBA will always remain engaged with relevant international partners such as the Chinese Embassy to critically dissect Liberia’s rule of law program and offer alternative means to keep Liberia’s democracy afloat. This is part of the LNBA’s commitment to advancing the rule of law in Liberia. “The LNBA believes that a vibrant rule of law system will only guarantee peaceful co-existence for Liberians,” he pointed out. “This is something that will only bring about peace for Liberians.”

Cllr. Rennie mentioned that, in accordance with the partnership between the Bar and the Chinese Embassy, Amb. Yisheng has kindly accepted an invitation from the LNBA to visit both the current and proposed headquarters of the Bar in order to become familiar with the activities that it engages in.

The leadership of the LNBA took advantage of the opportunity at the same time to issue a command to state prosecutors to call a three-week strike, which resulted in courts all over the country being rendered inoperable.