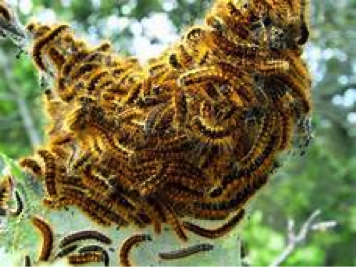 Reports from Wanhasa Administrative District in Lofa County say strange caterpillars have been discovered along the Khaiha River on the outskirts of Fagonda Town in that part of the country.

The worms are said to be posing serious threat to farm crops and creeks connected to Khaiha River and surrounding towns and villages in the district, LINA reports.

According to LINA’s correspondent in the area, local farmers in Fagonda Town and surrounding towns and villages are currently afraid that their crops could be destroyed by the strange caterpillars.

This is especially so at this time when they are harvesting their crops, including Liberia’s staple food rice; as well as pepper, bitter balls, okra, bananas, plantains and potatoes.

The residents are also afraid that creeks which they use for drinking, bathing and washing, due to lack of sufficient hand pumps, could be contaminated by the strange caterpillars. Residents use the creeks to fetch water to cook, bathe, wash as well as water their gardens.

According to the residents, the threat posed by the strange insects, if not taken seriously, could impede farming activities as well as affect Khaiha River and creeks connected to the river which residents depend on for domestic use.

The information recently gathered by the LINA correspondent in the area further revealed that farmers and residents of the area have already informed relevant authorities, including the Ministry of Agriculture through its Lofa County Office, the Lofa County Health Team (LCHT) and Environmental Protection Agency (EPA) about the recent discovery of the strange caterpillars posing serious threat to farm crops and causing health hazards for residents of the area.

Meanwhile, authorities of the Ministry of Agriculture have dispatched a team to Fagonda, Wanhasa Administrative District, to ascertain the discovery of the strange caterpillars, and findings are expected soon.