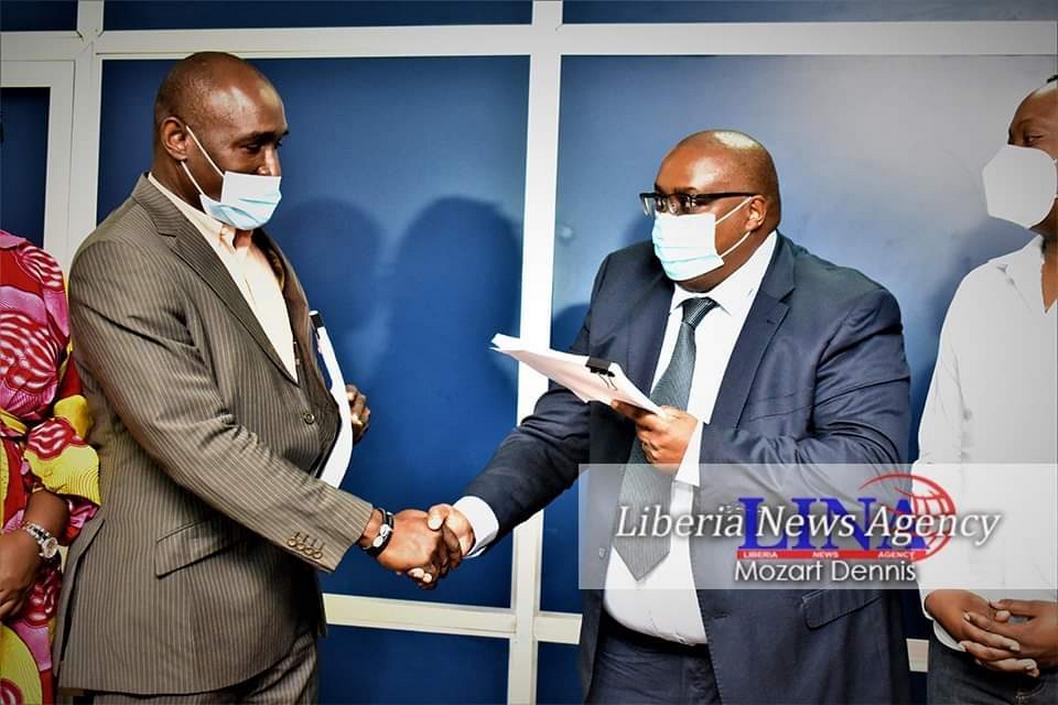 MONROVIA – The Liberia Revenue Authority (LRA) and Tracom Limited on Wednesday signed a full-fledged contract for the installation of Electronic Fiscal Device at businesses to help boost revenue collection in the country.

The “Electronic Fiscal Device” is a system that helps tax collectors mobilize and collect domestic revenue in the country and also help increase the level of transparency and accountability in the areas of revenue payments and collections.

Speaking during the official signing ceremony of the contract at the Headquarters of the LRA in Paynesville, the Commissioner General of the LRA Thomas Doe Nah extended his gratitude to the people of Tracom Services Limited for such a wonderful partnership that is intended to create job opportunities and protect the services of revenue collection in Liberia.

“We are hoping that this is the beginning of many of the new and interesting interventions that we are going to make in subsequent time,” Nah said.

Also, the Head of the National Investment Commission (NIC), Hon. Molewuleh B. Gray expressed thanks and appreciation to the two institutions for the milestone achievement.

He cited that the project is in the best interest of both parties, adding that it has been two years since they started the tender process and that the concession procurement process commences about two months before the signing ceremony.

“So, our laws anticipate that we need to have a concession certificate, to commence a tender process or any concession process. And we are happy that the concession certificate was issued because this project is under the auspices of the Ministry of Commence and the Liberia Revenue Authority. Therefore, we are very happy, and this is one of the projects among a series of projects that are underway,” Hon. Gray indicated.

Gray asserted that the issue about attracting investment is a process stating that on the contrary, other people think that it can be achieved overnight.

“After two years, they are now undertaking the project today. But we can assure the public that in the next six months they are going to be heading for more positive impacts,” Gray said.

At the same time, the Deputy Commission General for Technical Services at the LRA, Madam Decontee T. King Sackie stated that the agreement between Tracom Liberia Limited and LRA, with regard to electronic fiscal device is one of the many programs that is intended to help with the mobilization of domestic resources in Liberia.

She emphasized that the system will help protect and screen revenue, such as; goods and services status and corporate income tax, adding that the implementation of the project will not only achieve potential revenue growth, but will also facilitate the provision of data that will enable people to clearly understand what is going on with the economy.

For his part, the Managing Director of Tracom Services Limited, Paul Njau stated that the partnership between Tracom Limited and the Government of Liberia through the LRA is a milestone that will be beneficial to Liberian enterprises as well as the general Africa enterprises.

He said that Africa has 13 percent of its nations in tax trade while 73 percent of Africa trading are with other countries out of Africa.

Njau indicated that the initiative is among the few that they have been trading with and they are grateful to be able to trade with other African States so that they can be able to develop economic projects.

He stressed that Africa has the potential to generate close to 3.4 Trillion in business transactions.

“The Tracom family is very happy for such a wonderful partnership; which will be in the interest of Liberian enterprises,” Njau concluded.

President Weah Receives Letters of Credence from Ambassadors of Japan and...