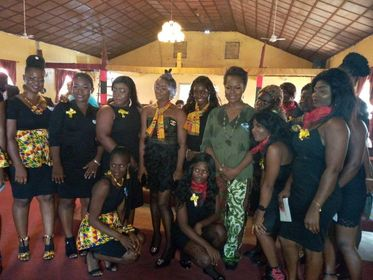 Monrovia: Former female presidential candidate Macdella Cooper has espoused the need for Liberian women to be stronger aimed at changing the world positively.

Speaking at the weekend when a local organization, Ati-Liberia graduated 24 young women from its nine-month intensive vocational training program in Paynesville City, Madam Cooper informed the participants, mostly young females that there is a need for stronger women who according to her can change the world.

The former standard bearer political leader of the Movement for One Liberia, Macdella Cooper, expressed gratitude to the organization for empowering some Liberian women during what she described as these economically challenging times that the country is confronted with.

She said the decision for the organization to empower young women to become marketable worth commendation, while appreciating the graduates for taking up such initiative aimed at becoming productive citizens through the knowledge acquired from the Ati-Liberia empowerment program.

She described women equality as economic empowerment that is intended to make women valuable in the society.

Madam Cooper then challenged the graduates to make decisions that would make greater impact in the Liberian society, informing the young female graduates that they are the carriers of their own vision.

She used the occasion to urge all young Liberian women to always strive to acquire skills that will make them to positively contribute to nation building.

“I want you to step out of childhood and move into adulthood so that you can now make the difference,” Madam Cooper challenged the graduates.

Also speaking at the occasion was the Founder and Executive Director of Ati-Liberia, Morris McCarthy, who disclosed that his organization was birthed with the objective to help vulnerable women become impactful in society.