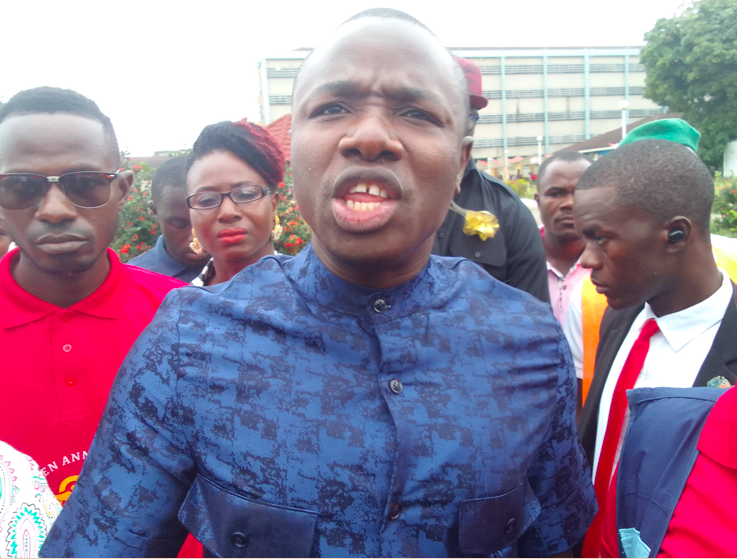 Mayor of Monrovia City Jefferson Tamba Koijee has distanced himself from the July 26th violence but launched a stunning attack on the opposition community.

Several people were injured in the clash between the Vanguard Student Unification Party SUP militants and Auxiliary supporters of the ruling Coalition for Democratic Change (CDC) political party of President George Manneh Weah.

The Militants of SUP came early Tuesday morning, July 26, 2022, to Liberia’s 175th Independence Day Celebration in the diplomatic quarter of Mamba Point near the American Embassy to urge the Weah Administration to “Fix the Country”, which they say, is reeling from chronic unemployment, mysterious deaths of some citizens, allegations of government corruption and poor governance. However, the Council of Patriots COP-CDC resisted in a counter-protest against SUP in Monrovia.

Tuesday’s unrest in Monrovia was precipitated by the pursuit of SUP militants by auxiliary members of the Council of Patriots (COP-CDC) who declare they support President Weah.

However, the mayor of Monrovia City, Jefferson Tamba Koijee, has responded swiftly to the allegations, accusing him of orchestrating the counter-protest by the COP-CDC against SUP militants, which ended in fights and injuries.

In reaction, Mayor Koijee has launched a spectacular attack on opposition players, accusing them of masterminding and promoting violence that would destabilize the country’s calm and tarnish the reputation of the Weah-led government.

He stated that Liberia has been through a lot, including an unprecedented fourteen years of civil war, and that now is the time for Liberians to set aside their political self-interests and unite as a state to take the country forward.

Koijee, speaking to journalists in Monrovia, urged the Opposition Community against engaging in political problems that might damage the country’s image. He stated that, while it is true that Liberia faces some issues, the opposition should approach President George Weah in a constructive manner as opposed to one that disrupts the country’s peace and introduces violence that destabilizes the nation. He urged the opposition to adopt a more patriotic and nationalistic approach to politics in order to propel the nation forward.

Koijee emphasized that, while it is true that the country faces challenges from the past, the opposition should have a sense of reasoning and capitalize on the government’s mistakes to improve the lives of the people instead of seeking and settling for unwarranted attention by supporting violence that will destroy the country.

He criticized the acts of yesterday’s counter-protesters and demanded that the Ministry of Justice conduct an immediate inquiry to determine who was responsible for disrupting yesterday’s Independence Day celebration and bring them to justice.

During yesterday’s counter-protest, some “SUP militants” were reportedly hurt in a skirmish with COP-CDC members and supporters, while student Christopher Walter Sisulu Sivili was severely injured.