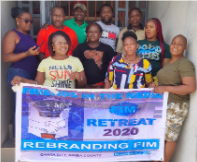 Ganta, Nimba County: A local media group, Friends in the Media (FIM) has committed to a complete rebrand to foster inclusiveness, diversity, and social cohesion amongst members.

The President of FIM Jennie Fallah Wounuah, at the Ganta 2020, Rebranding Retreat said she was glad that the members had gathered for two days to make history by deciding to pause -the cause of rebuilding and strengthen relations; a cause to construct reliable friendship, and a cause to live and interact in harmony despite “our diversity”, and a cause to serve humanity.

“We are gathered here to make history because this is the second significant retreat of our beloved organization – Friends in the Media—which will culminate with the election of new officers and bring some changes to our organization, Mrs. Wounuah remarked at Mountain Dew Hotel in Ganta where the retreat was held.

She emphasized that Friends in the Media is determined to make history and bring change to the organization, evident by “carefully and deliberately” selecting “Rebranding FIM” as the theme for the retreat.

According to her, the two-year tenure of her leadership has been heavily afflicted by Covid-19 but added, “I am thrilled that we have gathered here to open another era in the existence of FIM”.

She stressed that despite Covid-19 challenge, the organization has reached out to some needy, identified with some friends who have been in trouble or who have celebrated, but all haven’t gone well and all haven’t gone the way the leadership and members have wished and thought.

“There have been instances of lack of commitment and dedication on the part of us members,” the President noted.

The FIM president continued that the group has suffered what she called “issues of lack of sincerity, backsliding matters, issues of name-spoiling, issues of egotistic behaviors, and many more.”

These issues, she told the group, have to “an extent combined, and capped into problems holding back the forward movement or our dear organization.”

The Ganta gathering she noted was meant to find amicable ways to resolving outstanding issues and move forward.

Shortly after her speech, the retreat delegates broke into a major working session that relooked at the institution’s name, membership requirements, and commitment to stand with each other.

The working session presided over by Malcolm Joseph also reexamined the constitution – the mission, the vision, the values, and the membership commitment. All with the intent of rebranding, resetting, and recalibrating efforts and garnering strength to establish a more impressive, dynamic, inclusive, and realistic FIM.

At the retreat, members also committed to continuing their charitable activities and support to the less fortunate and the needy in Liberia.

As part of this commitment, the institution made two separate donations to institutions in Nimba County over the weakened.

The donations which include rice, oil, and soap benefited the Hope of the Nation orphanage and the girls’ dormitory at the Methodist run nursing school in Ganta, Nimba County.

FIM was birthed about seven years ago in 2013 when a group of “like-minded media practitioners” and other friends decided to establish an organization that will cater to their welfare and well-being and meaningfully contribute to the needy in society.

A not-for-profit and non-political charity group, FIM’s mission is to make far-reaching impacts in the lives of the less fortunate and those in dire need of assistance as a means of survival. The group was established to stand by members in times of trouble and celebration to show humanity’s strong solidarity.

The organization’s first retreat and elections were held five years later in June 2018 in Buchanan City. Ms. Jennie Fallah-Wounuah was elected as President; Jefferson Jimmy as Vice President, D. Kaihenneh Sengbeh (who is currently doing his Masters in Europe) as Secretary-General, and Ms. Shirley Wilson Flomo as Financial Secretary.