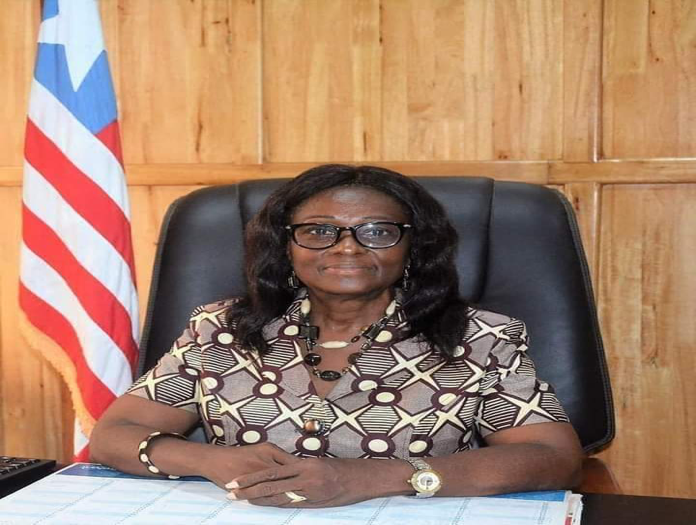 Madam Davidetta Browne Lansanah, the head of the National Elections Commission, has dismissed media accusations that she was approached by the Office of the President to rig the 2023 elections in favor of the ruling Coalition for Democratic Change (CDC).

The NEC boss remarked during a press conference on February 28, 2022 at the National Elections Commission headquarters in Monrovia that the commission has conducted free, fair, and credible elections under her leadership and that it will continue to do so regardless of the conditions.

“The Commission has conducted free, fair, and credible elections under our supervision and will continue to do so.”

Despite the wonderful job the commission has done under her leadership, she claims that some members of the media, particularly the Hot Paper newspaper, have been spreading false information about her work at the commission.

“Early this morning, members of the press, I read with dismay and most disgust the Monday’s edition of the Hot Paper Newspaper report captioned, “No Deal, NEC Boss tells Min. McGill,” she said.

She claimed that the newspaper cited a press release from the International Justice Group (IJG) alleging that the head of the national elections commission, Davidetta Browne Lansanah, stated in an interview with the IJG that the Minister of State for Presidential Affairs, Hon. Nathaniel McGill, had made her a specific offer to rig the 2023 General Elections.

Under her leadership, the Elections Commission was recognized for successfully executing many by-elections, notably the 2020 midterm senatorial election, which saw major opposition victories.

However, many believe that the Hot Paper Newspaper’s latest revelation is casting a pall over the Presidency and accusing the president in shady dealings with the upcoming 2023 elections. The Minister of State and the Mansion have made no public pronouncements in this regard as of press time. It is hoped that in the following days, the mansion will reassure the people that the election in 2023 will be free, fair, and transparent.