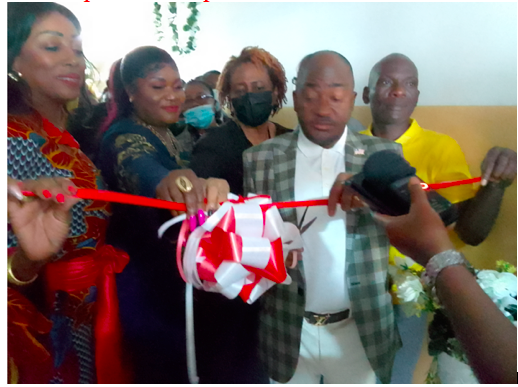 MEMA’S Dining & Catering Services, a restaurant owned and operated by Liberians, has officially opened for business.

The MEMA’S Dining & Catering Services (Cafeteria) also intends to make visitors, foreign dignitaries, diplomats, and the general public feel at home while dining at a first-class restaurant, described as second to none in the entire Republic, serving authentic English, European, and African cuisine along with genuine Liberian hospitality.

MEMA’S Dining Catering Restaurant serves, among other things, bangers and mash as well as sausages and mashed potatoes, Liberian delicacies such as cassava-leaves, potato greens, beans, Palaver Sauce, and oregano, among others.

Also available are a selection of soft drinks and alcoholic beverages, as well as great cuisine for youngsters served in a lively environment with good music.

Ms. Isatu Ike Nou-bi-bou, the proprietor, stated that she and her team take great pride in setting high standards in the area of food, and not just any kind of food, but mouth-watering, highly delicious, and rich-tasting foods made with only the finest food products, to distinguish MEMA’S Dining Catering Services & Restaurant from the competition.

MEMA’S Dining & Catering Services (Cafeteria), located on the First Floor of the Ministry of Foreign Affairs building, aspires to be regarded as the nation’s greatest option for scrumptious and healthy Liberian and European cuisine, as well as quick delivery services.

When you enter the restaurant, you are greeted by classic décor and a warm, inviting ambiance, as well as moderate and inexpensive rates as low as $300 Liberian dollars, which are certain to satisfy.

The Foreign Affairs Minister of Liberia, the Honorable Dee-Maxwell Saah Kemayah, Sr., was among the dignitaries that attended the restaurant’s opening, and he praised MEMA’S Restaurant as unrivaled.

Minister Kemayah expressed satisfaction as he cut the ribbon for the formal opening of MEMA’S Dining & Catering Services (Cafeteria), a restaurant that will serve the people of Liberia at inexpensive prices.

According to him, MEMA’S Dining Catering Services was chosen through a competitive bidding process in accordance with the Ministry’s transparency and reform goal.

He stated that the bidding for the restaurant and catering service at the Ministry of Foreign Affairs was conducted competitively, involving every and only Liberian catering service, which speaks volumes to President George Weah’s vision that Liberians will not be spectators of their economy, and is also in line with the government’s Pro-Poor Agenda for Prosperity and Development (PAPD).

In addition, Minister Kemayah said that at least one hundred Ministry of Foreign Affairs-Liberia employees are presently benefiting from a cash and loan scheme for empowerment, which he described as a unique chance for people to build their homes and better their living conditions.

Former National Port Authority (NPA) head Matilda Parker, former Mayor of the Monrovia City Corporation (MCC) Madam Ophelia Hoff Saytumah, and Liberia’s Culture Queen and head of the Liberia Crusade for Peace (LCP) Amb. Juli Endee are among the dignitaries and VIPs who sampled the first meal at MEMA’S Dining Catering Services. They all expressed excitement about the facility and the delicious food, and encouraged the Former NPA leader Matilda Parker thanked Madam Isatu Ike Nou-bibou for providing such a delicious supper at such a modest cost, and she encouraged other prominent Liberians to follow in her footsteps. “The lunch is so delicious for such a little cost, as low as $300LD,” she said, adding, “I encourage other Liberians with an entrepreneurial spirit to do the same. It doesn’t have to be a restaurant, but rather than sitting around doing nothing, you can do something else.”

“We will give you the same length of time we gave...