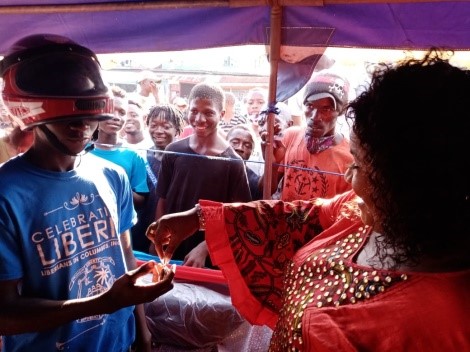 20-year-old Milton Nathaniel George is a proud owner of a custom bike after winning the giant-size prize October 2020 in the Prevenient Grace Album launch raffle that is filled with several exciting and attractive prizes.

George scooped the Brand New TVS Star Motorcycle after entering the draw to support the Prevenient Grace Album. His lucky ticket was picked on Saturday for Just 400 Liberian dollars as the lottery process was all but transparent.

A team of the Liberia Lottery Committee, in partnership with the Liberia Crusader for Peace (LCP), carefully conducted the raffle draw, with the public eye-catching, every seconds as unknown individuals pick tickets from a close barriers that spin, before selection of the ticket.

George was delighted to win the prize and said: “I am over the moon to have won this bike. “I cannot wait to ride it, showing it off. I can’t believe I have won.” I am so happy to win this Motorbike and I will use it to run traffic and come back in December to win the Keke, the Process is very transparent and I encourage others to come and play and be winners like me”, he said.

Explaining his luck fortune, he added: “I entered the draw today, and was so worry about spending my 400 dollar, but now I am overwhelmed.”

Presenting the keys of the Motorbike to George, Ambassador Juli Endee, expressed joy that another giant-prize has been gives away, by the Liberia Crusader for Peace (LCP).”

This Bike you have won is good for you to start a fresh Journey to success, ” we give the bike to you in the name of the Father, the Son and the Holy Spirit,” she said.

“You will be successful, you will raise money, from the bike help yourself and your Family, come December too and win the Car, as encourage all of you out there to come and purchase a ticket and smile like George,” she said.

The raffle draw was suspended as a result of the coronavirus pandemic in the country which resulted to restrictions on large gatherings. Three rounds have already been conducted with several happy winners prior to the suspension.

Meanwhile, Ambassador Endee included raffle draw in her album launch as a way of giving back to Liberians who have supported her work over the years.

The next round of raffle takes place in November and December at the Liberia Crusaders for Peace Headquarters on Capitol Bye-pass.