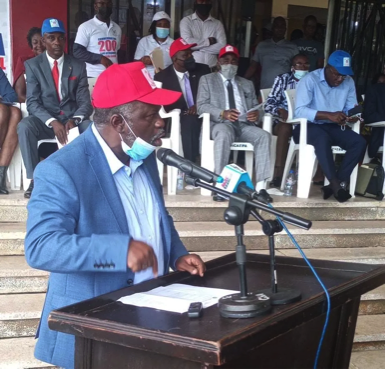 Presidential Affairs Minister, Nathaniel McGill has blasted some citizens of Lofa County for what he described as mixing tradition with politics.

Minister McGill condemned in the strongest term, the mixture of the country’s culture and tradition with politics. The Presidential Affairs Minister pointed out, “This is shameful and embarrassing to see people bringing our tradition into public ridicule.”

McGill warned that if people have issues, the best way is to use the law and not through traditional means as been seen in Lofa County in the last few days.

Responding to questions relative to settling the Lofa County election saga, Minister McGill in an angry and emotional mood wonder how will a Country devil have a press conference on political issues.

Speaking on Thursday December 2, 2021 at the Ministry of Information, Culture and Tourism’s regular press briefing, McGill said, “This has never happened before for a Country Devil to have a press conference; this is a shame to our tradition and I think everybody must condemn such attitude.“

He added that Liberia is greater than anybody and as such, the country cannot be torn apart because of politics. Minister McGill blasted at those who want to take state power to use traditional means thereby risking the lives of ordinary traditional people.

Minister McGill stressed that whoever behind such action must be disgraced because there is no way a country devil can discuss election matters. He wondered if all of the country devils come out and talk about election issues what will happen to Liberia.

McGill added that those who engage into such issue should be publicly rebuked because they have brought shame to the tradition of the Lofa people.

Among other things, Minister McGill emphasized, “I was totally ashamed of myself; do you know what it means when a Country Devil comes out?

He challenged politicians to stop said behavior adding that Liberia needs unity and it is no time to divide the people of Liberia. “When issue is before the Court it should in no way be send and or handled by traditional means,” he added.

He told reporters that said ugly attitude should never happen and even the Chief Zoe who engaged in said should be condemned.

McGill assured that the government is ready and willing to listen to any issue because it is part of the democratic process and that is why the government tolerates protest, which must be done in conformity with the law.