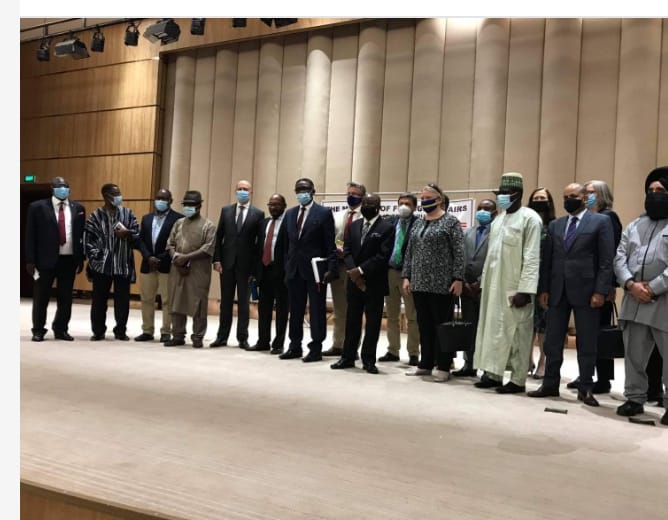 – As the Ministry concludes 4-day-retreat

Monrovia, October 25, 2020-High level members of the diplomatic corps of Liberia graced both the opening and closing ceremonies of the Ministry of Foreign Affairs 4-day-retreat. The occasion was graced several diplomats including the Deputy Doyen of the Diplomatic Corps, US Charge d’ Affaires, British Ambassador, Swedish Ambassador, the European Union Ambassador and members of the European Union Delegation, ECOWAS Ambassador, the Dean of the Consular Corps in Liberia, amongst other high profile diplomats as well as the United Nations Resident Coordinator, a.i. Dr. Kingsley Opoku Amaning

The UN Resident Coordinator, Dr. Amaning who served as Key Speaker at the Opening Program of the retreat, also made remarks at the closing ceremony of the retreat and committed to support the Ministry of Foreign Affairs’ reformed agenda initiated by His Excellency Mr. Dee-Maxwell Saah Kemayah, Sr..

The UN envoy in a remark said the United Nations was prepared to do all it can to render relevant support to the Ministry of Foreign Affairs in the areas of training of workers to build their capacity for effective service delivery and proper representation of the image of the country. The top UN envoy comment comes in the wake of a passionate plead for support from H.E. Dee-Maxwell Saah Kemayah, Sr. at the end of a four-day-retreat that brought together 100 participants across all department, bureaus and units in the Ministry of Foreign Affairs.

According to a Foreign Ministry release, Dr. Amaning made the disclosure at the climax of a four-day-retreat of the Ministry of Foreign Affairs held at the Ministerial Complex in Oldest Congo Town.

The four days’ retreat was held under the theme “Envisioning and Enhancing the Future of the Foreign Policy of Liberia – During and Post COVID-19”.

The United Nations Resident Coordinator said the UN is ready at any time to provide necessary support, human resource and expertise, when needed by the Liberian Government. Dr. Amaning reemphasized the importance of education and training for the workforce of a country, especially Foreign Service Officers; something he said is key if the nation is to flourish through diplomatic engagements.

Also speaking, the Keynote Speaker at the closing ceremony of the four-day-retreat, Senior Ambassador at-large and Chairman of the Policy Advisory Council (PAC), Amb. Jarjar Kamara described the four-day exercise as rewarding and timely to enable the Ministry identify gaps and the way forward.

He said, Liberia is a great nation whose political ideology and foreign policy is deeply anchored on Liberalism, Capitalism and Democracy.

Ambassador At-large JarJar Kamara highlighted the urgent need for qualified and experienced Liberians to represent the country at its diplomatic missions through a thorough vetting process void of political influence.

The Keynote Speaker also echoed the need for civil engagement in the rebuilding process of Liberia; noting, “disunity amongst Liberians continues to impact the country negatively.

For his part, the Special Representative of the President of the ECOWAS Commission in Liberia, H.E. Babatunde Ajisomo said, ECOWAS will provide full support in ensuring that Liberia ascends to the Chairmanship of the Sub-regional body, the Mano River Union (MRU).

“Liberia has a rich history in the diplomatic community that it needs to reclaim on the African Continent by taking its right position in various regional and international organizations, and the Ministry of Foreign Affairs has a major role to play in strengthening and rebuilding Liberia’s image”, he stressed.

Ambassador Ajisomo reiterated the need for capacity building of Foreign Service Officers and a merit based recruitment process, without which he said, it would be difficult to achieve the Foreign policy objectives of Liberia.

Ahead of the ensuing December 8, 2020 elections, Ambassador Ajisomo called on the Government, major stakeholders and Liberians at large to demonstrate to the World that Liberia is consolidating its democracy by having free, fair and transparent elections which will stimulate investors’ confidence in the country’s judicial system.

Also speaking, the Minister of Foreign Affairs, H.E. Mr. Dee-Maxwell Saah Kemayah, Sr., on behalf of H.E. President George Manneh Weah, thanked members of the Diplomatic Corps whose presence at the four-day-retreat, he said, signifies their interest and value for the friendship with Liberia. “It is hoped that Liberia’s relationship with other countries, regional and international organizations, will move from strength to strength”, he noted.

The Liberian Foreign Minister revealed that transparency, accountability and hard work would be the hallmark of his stewardship over the affairs of the Ministry, adding, “When the workers are informed about the workings of the Ministry, it eradicates speculations.”

“I am more concerned about getting the job done and I do not envisage smooth sailing in this reform process of the Ministry, but I am resolved and will be uncompromising in my endeavor because to ignore this mandate will show that I am not up to the task.”

The Dean of the Liberian Cabinet further emphasized that his foremost concern is how to strengthen and improve service delivery at the Ministry, so as to ensure that there is value for money.

Minister Kemayah highlighted plans to restructure the Foreign Service of Liberia, promised to honorably retire those who have served and met the criteria for retirement; while at the same time warned against as well as, instituting disciplinary actions against employees who behave contrary to the foreign policy objectives of Liberia.

Meanwhile, two representatives who spoke on behalf of participants from the Ministry of Foreign Affairs workforce, Mr. Rennie Thompson and Esther William-Forkpa, in separate remarks described the retreat as the first of its kind since they both joined the Ministry; thereby thanking the Minister for the farsightedness in organizing a retreat geared towards reforming of the Ministry.

“I would like to extend profound gratitude to your Excellency Dee-Maxwell Saah Kemayah, Sr. for this historic retreat and to commend you for the openness of the budget for the Ministry; and would also like to thank His Excellency President George Manneh Weah for appointing you as Minister of Foreign Affairs”, said Mrs. Forkpa.

For his part, Rennie Thompson urged the Minister to remain resolved and focused in implementing whatsoever decision generated from the four-day-retreat.

The Ministry of Foreign Affairs is expected to submit comprehensive report on the retreat to the Office of the President of the Republic of Liberia, H.E. Dr. President George Manneh Weah.

“We know the risks of climate change for Liberia”